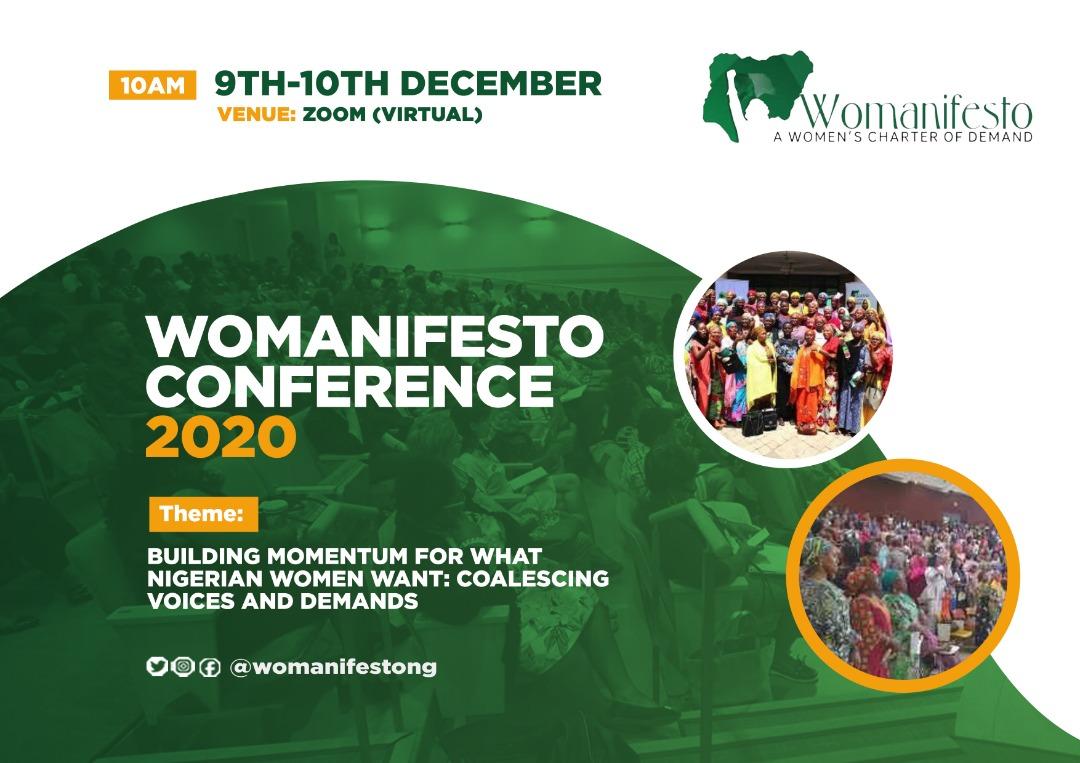 For Nigerian women to compete favourably on the nation’s socio-political field and assume leadership positions in various areas of human endeavour, there is need for them to synergize and work together as one to achieve a common goal.

This was the take home and the unanimous conclusion of leaders of thought and gender influencers who spoke at the 2020 edition of WOMANIFESTO conference, which held largely as a virtual event with over 15 locations of clusters of participants across the country from Wednesday, December 9, to Thursday December 10 in Abuja.

These renowned activists made this assertion during the day 1 of the second edition of WOMANIFESTO Conference,

Women leaders and activists such as; the wife of the Ekiti State Governor, Erelu Bisi Fayemi, Co-Convener of Bring Back Our Girls and former Minister of Education in Nigeria, Oby Ezekwesili, Executive Director of Women Advocate, Research and Development-WARD-C/Convener of WOMANIFESTO, Dr. Abiola Akiyode-Afolabi, Chairperson of Gender and Constitution Reform Network, Joy Ezeilo all called on Nigerian women to stay together and develop a platform capable enough to attain greater political and socio- economic powers like their male counterparts.

The Conference tagged the Covid Edition and themed ‘Building Momentum for What Nigerian Women Want: Coalescing of voices and demands’ was attended by over 1000 women globally.

In her opening remark as the chair of the WOMANIFESTO 2020, Prof Ezeilo encouraged Nigerian women to come out and speak out against gender based violence as well as take a bold step into getting involved in the socio-political environment in the country.

“The era when it’s popularly believed that the place for the women is in kitchen is over and should be made to be over by us. No one can change our situation but us. To this end, we have to be resolute and form ourselves into organisations to be able to achieve this,” she said.

She however, cautioned women not to allow themselves to be used by some elements, who could derail this aim and objectives.

The wife of the Ekiti State governor, Erelu Bisi Fayemi, who spoke issues related to gender-based violence stated that a new culture orientation was required to groom the next generation of men who will see women as counterparts rather than weaker sex.

According to her, Nigerian women need to build new orientation such as public and corporate, social and civic and academia. “We have not done very well with public and corporate engagement. It is time for us to properly engage public sector and private on feminism. A lot more need to be done,” she enthused.

On social/civic, the chairperson of the Nigerian Governors’ Forum Wife revealed that the engagement in this area has been a bit adequate. “Let us continue to engage the religious leaders, traditional leaders and other stakeholders in the society for proper upbringing of the boy child who would be within the next generation of men.”

“For the academia, I want to commend Dr. Abiola Akiyode-Afolabi for the fantastic work she has done and continue to do in this direction. The academia has networked well but other levels of engagements need to double up,” Mrs. Fayemi said.

She revealed that her project is working on having a month as a national women’s month and April every year has been proposed.

The keynote speaker, Dharmaraj Krishanti, Executive Director, Centre for Women’s Global Leadership and Convener Feminist Alliance for Rights Herstory and Future of the 16 days of Activism on Ending Violence against Women, said that time has come for women to take their destiny in their hands.

According to her, “Women must understand what they want and go for it. The era of demand is over we should go for it. We should seek to occupy political space, private sector and other sphere of endeavor if we must make the necessary change we desire.”

She however cautioned women to do it discreetly.

In her welcome address, the convener  of WOMANIFESTO, Dr. Abiola Afolabi said, “National Women’s Dialogue 2020, which is in commemoration of the first anniversary of WOMANIFESTO conference is a national conversation proposed for women from different groups to reflect on the gender equality results experienced in Nigeria since November 2019; and to deliberate on using the opportunity of budget preparation to advocate for governments resourcing of women’s aspirations; (c) to strategize for 2023 elections.

She said, “The discussion has to focus on strategies for making Womanifesto: What Women Want to work. Women groups will come up with definite implementation strategy to work in the 36 states across the country to advocate for expansion of budget for women.”