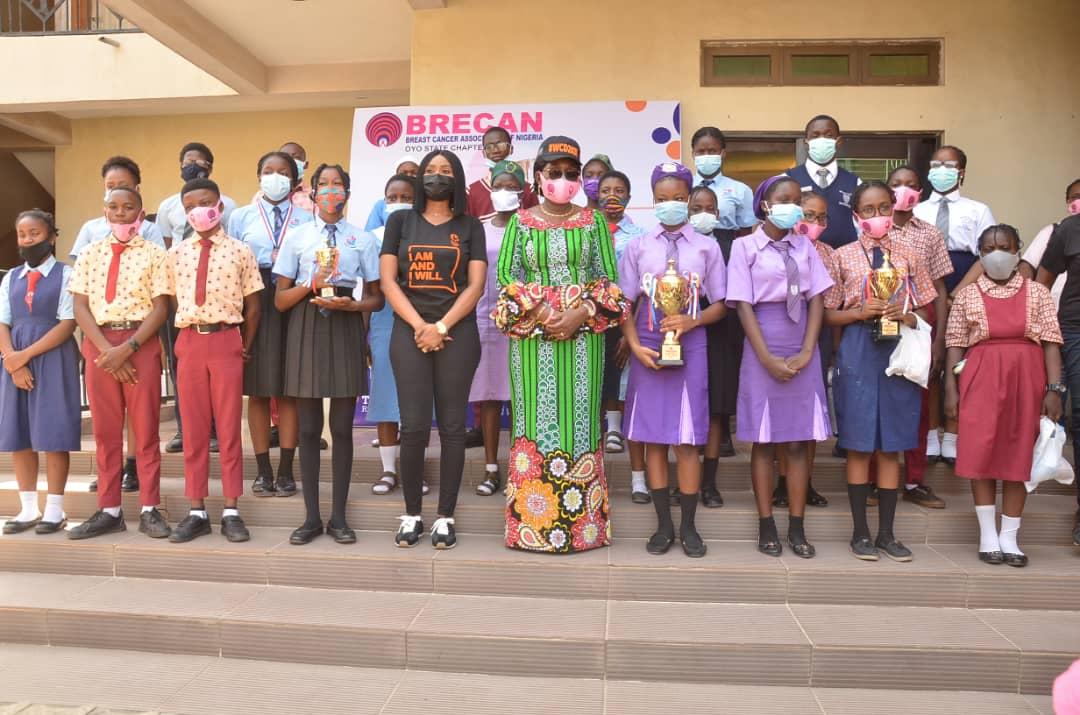 The wife of Ondo State Governor and founder Breast Cancer Association of Nigeria (BRECAN), Arabinrin Betty Anyanwu-Akeredolu has shared her breast cancer story, calling herself a lone voice in the wilderness as nobody wanted to be associated with BRECAN at its formative stage.

Arabinrin Akeredolu stated this while addressing student participants drawn from different schools across Oyo State during the Inter- School Arts Competition held at the Law Hub, Ibadan organized as part of activities marking 2021 World Cancer Day by the Oyo State Chapter of BRECAN.

She acknowledged the contributions of individuals, groups and most especially volunteer students who through advocacy raised funds for BRECAN’s activities and said the journey has been tortuous and rewarding as more lives have been impacted.

While noting that the Arts Competition was the second of its kind in the history of BRECAN in promoting breast cancer awareness, Mrs. Akeredolu said BRECAN is now set to help eliminate incidence of Cervical cancer which she noted can be eliminated one hundred percent.

On why women have continued to die needlessly because of the disease, Mrs. Akeredolu identified ignorance as one of the major causes, saying, “it is shocking that some still assume it is a spiritual attack and only present when it is too late.”

Mrs. Akeredolu, while stressing that cervical cancer can be eliminated through vaccination, said it’s high time parents are educated on the need to give consent to the vaccination of their children against Cervical Cancer. She also urged the students to be breast aware and be breast health advocates wherever they find themselves.

In her Goodwill Message, Olori Adejumoke Adeleye, Olori Olubaka of Oka land, commended Mrs. Akeredolu for initiating BRECAN. The Olori said Arabinrin Akeredolu’s committment to the cause is laudable and will remain a ray of hope to many. She prayed for wisdom and grace for survivor of 24 years to continue in her service to humanity.

The climax of the event was the presentation of prizes to winners. All Saint’s College came first in the competition followed closely by Seed of Life College which came second and the third position went to Lead City International College.

Earlier, Promise Ihieze while speaking on the theme of the program: “Hope” said the Arts Competition was their own way of sending the message of hope across to survivors and bringing attention to the cause.

The state Chairperson for Oyo State BRECAN, Tolu Taiwo, in her Welcome Address, acknowledged all those who have been pillars of support to BRECAN over the years, noting that there is still more grounds to cover.

Other dignitaries in attendance include Bashorun Arogunjo and his wife, BRECAN members from across the state among others.