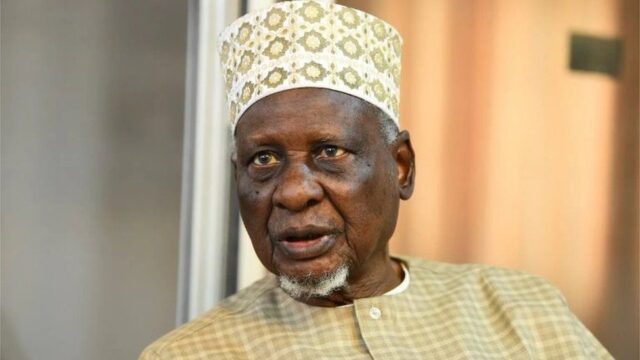 Yakassai while delivering his welcome address as Chairman at the Niche Annual lecture in Lagos, called for people-oriented change and peaceful restructuring of the current federal system.

Below is a full text of his speech.

I wish to thank the organizers of this event for inviting me to chair this important lecture to be delivered by one of the renowned political actors in our present dispensation in the person of Honourable Minister of Works and Housing, His Excellency Babatunde Rasheed Fashola, former Governor of Lagos State.

The topic of this lecture as we all know is “Nigeria at The Cross Road: The Chellenge of Post 2023.

The Nigerian federal system of government was established in 1954 making it the oldest in the African continent. The system underwent experimentation with varied and distinct three divergent models, including “Parliamentary system”, “Military Regimes” and “Presidential System of Democracy”.

A good characterisation of these systems of government was given by Ladipo (2005) in which the Parliamentary System of Government operated in 1954-1965, was seen as an apprenticeship to “true” federalism phase. This system was attributed by political devolution and intergovernmental competition among regional governments which witnessed modest development in virtually all the regions.

The successive military regimes (1966-1979 and 1984-1999), were prominent for imposing centralism- an overwhelming central government dominance which kept Nigeria united but began to stagnate its progress.

The Civilian administrations (1979-1983 and 1999 to date) operated under Presidential System of Government run the federation majorly through trial and error and overtime generated massive economic, social and political tensions which the country is currently struggling with.

It is not my intention to delve into the details of the dynamics and implications of our federal systems or the various systems of administration implemented overtime. This is the domain of the key note presenter whom I believe would, in his own wisdom, enlighten us on our journey so far and what to anticipate after 2023.

However, I feel it is my place to emphasize that Nigeria is currently at the crossroad. There is the overwhelming consensus that the political leadership under the current federal system is far from being optimal. The democratic government which ideally should serve the people and build enduring institutions had only succeeded in creating a generation of oligarchs and political entrepreneurs running the country as a private undertaking and not a federation responsible for the well-being of over 200 million people.

Today, 62 years after independence, it is shameful that Nigeria is described as a resource endowed but a poor country. The study by Heritage, (2021), described Nigeria as mostly unfree characterized by severe political instability, security threats, policy failures and disregard for the rule of law. More fundamentally, the lack of diversification – Production and income, in spite of the several policies and plans, continue to worsen the socio-economic challenges of the country.

The dismal performance of the successive governments in harnessing the abundant natural resources and large population has been blamed for the increasing poverty, hunger, insurgency, militancy, youth restiveness, kidnapping, armed robbery, drug abuse, political thuggery, vandalization  of national assets, and others.

Unfortunately, there is no clear sign or political will to reverse this negative trend. The lack of empathy, patriotism and developmental orientation among our political leaders may not be unconnected with the massive powers and resources they control, especially at the Centre. No wonder, the nation is hoping for positive change and clamoring for restructuring after 2023.

It has been my long standing argument that the regional system of government worked better for the country when compared to all other experimentation. However, in view of the changing local and international dynamics coupled with institutional limitations, reverting to the regional system may not be helpful and feasible under our current precarious situations.

For this, I advocate for people-oriented change and peaceful restructuring of the current federal system to devolve power and responsibilities to the sub-nationals which would, in turn, offer better opportunity for stability and unity.

Also, instead of promoting zonal divisive politics, manifesting in the current geopolitical zones arrangements, I support conscious shift to regional competitiveness under a Geo-economic zones model to provide regions with unique opportunity to collaborate, under an agreed structure, to stimulate economic growth in their areas of comparative advantages which may include, industry, agriculture, services, infrastructure, knowledge economy, etc.  Eventually, this would offer greater opportunities for states and zones to grow and develop faster than in the current system in the post 2023 era.

In my opinion that decision was not driven by proper rationale of the suitability of the American system in our own peculiar national situation.  The decision has not done justice to the parliamentary system and Nigeria as a country and its developmental needs and economic circumstances. This is because parliamentary system is more democratic in its nature than American Presidential System. It is for that reason that I have been advocating the adoption of French Presidential System of Government for Nigeria. In my opinion it is easier to replace non performing Government in that system than in the American Presidential System.

Another important reason why I am advocating the adoption of the French presidential system is that it is far cheaper to operate and therefore more suitable to our own reality as a developing Nation. The operation of American system that made administering Nigeria which is a Federal State with diverse nature more expensive to ran and extremely difficult to develop and prosper, unlike many of its sister developing Nations.

Finally, I would like us to use the opportunity provided by this gathering to interrogate all underlying political and other challenges bedeviling our nation and proffer actionable solutions that could guide our future leaders in their bid to save the nation and her people from political misfortunes and current national predicament of nation building facing all of us. We should do away with the present system which is prone to waste, corruption,  secondamania and discourages accountability.

Thank you for your time.