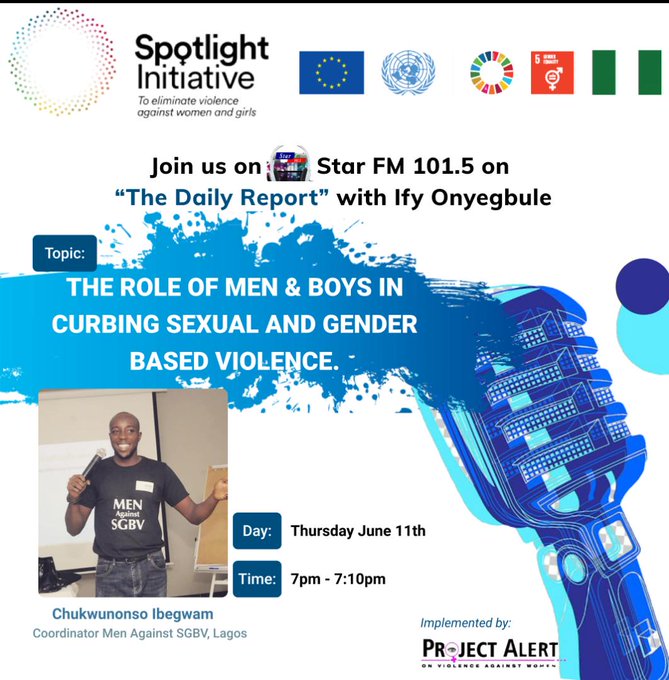 The issues of gender-related violence have continued to dominate discussions in Nigeria, with a focus on the role of men in curbing the menace following the rising cases of sexual violence against women.

On the Spotlight Project, implemented by Project Alert on Violence Against Women, the role of men and boys in curbing the violence was the focus of a discussion on the Daily Report on Star FM, Lagos, with the Coordinator, Men Against Sexual and Gender-based Violence, Mr Chukwunonso Ibegwam who decried the rate at which men were sexually molesting the women.

Ibegwam said that as Men, “we need to build our consciousness to deal with these issues relating to gender-based violence, we need to take a stand and get in the driver’s seat and find a way to bring the issues to the front burner by creating huge awareness for it”

He maintained that there should be walks organized for men, by mento address the norms, culture and traditions that have led us to where we are.

Ibegwam pointed out the “oro” festival in Ikorodu and the Female General Mutilation that many girls have faced and others are still facing, describing it as a practice that is discriminatory against women.

According to Ibegwam, some of these practices and norms should be critically looked at to see how the can be modified or even abolished.

How do you reach out to the men and what do you talk about when you meet?

Ibegwam says that as a group, “we meet men in the communities, meeting with artisans and small businesses dominated by men and we have done some sensitization with them”

Ibegwam confirmed that some of the men do not even know that some of the things they do to the women are wrong so they abuse and insult their wives oblivious of the fact that these actions are a form of violence against women.

On the issue of rape, he says that it is wickedness to rape anyone because any man who thinks about his mother, sister or daughter will never think about causing harm to a woman.

On the assertion that some women mean Yes when they say No, Ibegwam agreed that there is this understanding amongst men years ago in school that the tone and actions of some women when she says NO, simply meant “stop it” I like it but he says that all that should have changed because when a woman says NO, it should mean NO and as men, there should be self-control when she declines your advances.

While reacting to the issue of Uwaila, the young student that was raped and killed in Edo State, said it was a terrible thing to do and he wondered why anyone will take advantage of any human being or forcefully have sex with her.

“As men, we need to sensitize ourselves to know that rape is bad and we must do everything in our powers to change the current ugly situation.

The EU/UN funded Spotlight Project is being implemented by project Alert on violence Against women and is on Air every Thursday on Star 101.5FM.