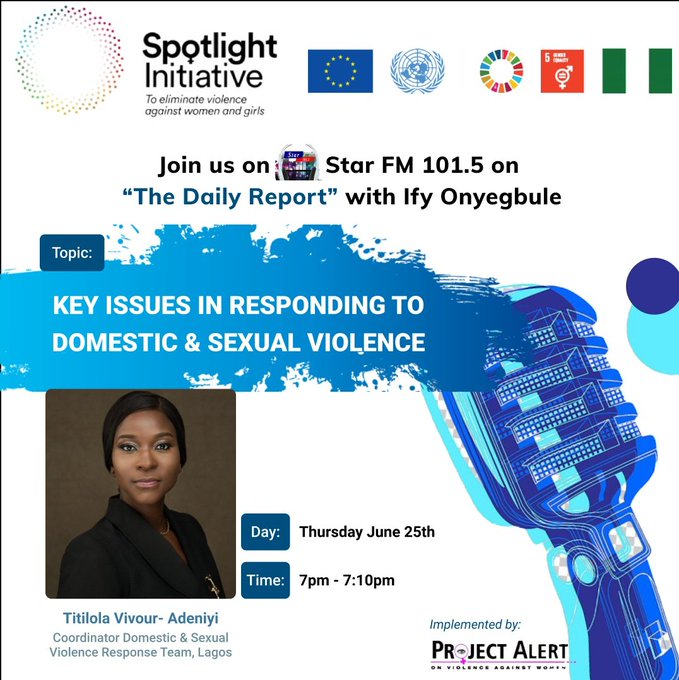 Domestic violence in Nigeria is a problem as in many parts of Africa because there is a deep cultural belief in Nigeria that it is socially acceptable to hit a woman to discipline her as a spouse so people don’t see that violence as a genuine assault.

Not many understand that domestic violence is widespread and takes many forms including physical, sexual, emotional, and mental.

The very common forms of violence against women in Nigeria are rape, acid attacks, molestation, wife beating, and corporal punishment that some men are known to dish out to their wives and daughters as the case may be.

Mrs Titilola Vivour-Adeniyi, the Coordinator, Domestic and Sexual Violence Response Team, Lagos while guesting on the Spotlight Project being implemented by Project Alert on Violence Against Women, which aired on Thursday June 25, 2020 mentioned that women face one form of violence daily in their lives, she said sometimes, these women do not even know that what they are going through in the hands of their spouses and in-laws can be classified as violence but they go on with it because the society thinks it is okay to be treated in such manner.

Vivour-Adeniyi while reacting to the issues relating to responses to domestic and sexual violence, mentioned that the Domestic and Sexual Violence Response Team (DSVRT) is an organisation under Lagos state Government committed to ensuring total eradication of Sexual and Gender Based Violence in the State.

It is a known fact that women often face physical violence at the hands of their family members. When asked why they brutalise their spouses, some of the reasons that were given for physical abuse include acting under the influence of alcohol, financial issues, and the rejection of a partner’s sexual advances, where a woman says no, she doesn’t want to have sex because she is ill, tired or not in the mood so this results to an attack from the man.

She mentioned a few police stations across Lagos, listed on the DSRVT website, where people can lodge complaints because those stations have trained officers that can handle the issues of sexual and domestic violence.

While domestic violence is a violation of fundamental human rights, which the Nigerian Constitution is against, there are still provisions that make it legal to engage in domestic violence against women when we look at the culture and tradition in this part of the world and Mrs Adeniyi says “every domestic violence is a potential murder case” and women need to be careful as the beatings graduate to hitting and attacks with objects.

She called for psycho-social support for survivors and urged them to call a friend, a family member, or someone they trust who can give them support. She also urged the women to preserve all physical evidence of the assault, write down as much as they can remember about the circumstances of the assault, including a description of the assailant.

She mentioned the Mirabel Centre in LASUTH, a Sexual Assault Referral Centre for free medical and counselling services or find an alternative medical facility where they can present themselves for medical attention.