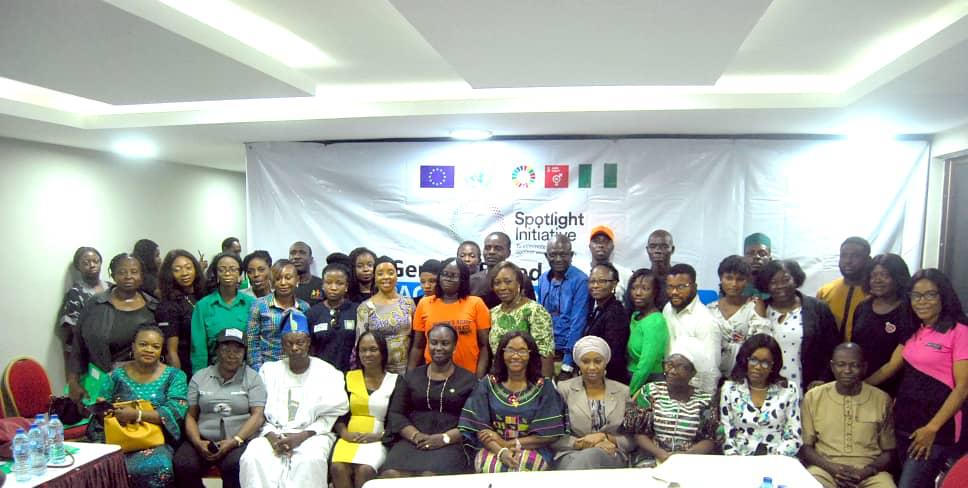 Project Alert, a non-governmental human rights organization based in Lagos and a key implementing partner for the Spotlight Initiative, organized a 2-day Workshop titled “Capacity Building for Girls and Women CSOs/Rights Groups on Referral Services for Victims of SGBV” where key stakeholders discussed issues surrounding the violence and discrimination against women and girls and how this has become a challenge for this vulnerable group in their day to day activities.

Founder/Executive Director of Project Alert, Mrs Josephine Effah-Chukwuma during the workshop, said the Spotlight Initiative project is a multi-year initiative by the European Union (EU) and the United Nations (UN) focused on eliminating all forms of violence against women and girls globally.

Effah-Chukwuma mentioned that the Spotlight Initiative Project has 6 intervention pillars that mutually reinforce themselves, namely Laws & Policies, Institutions -strengthening national government and regional institutions, Prevention -Promoting social norms and attitudes that help prevent violence against women and girls. Others are Services – provision of high-quality essential services for survivors, Data – improving the quality and accuracy of data on violence against women and girls, lastly, Women’s movements which is basically promoting a strong and empowered civil society and women’s movements.

She maintained that the outcome expected of this project, is for women and girls who experience violence and harmful practices to use available, accessible, acceptable, and quality essential services, including long term recovery services from violence.

On the issue of essential services, the MD of Mirabel Center, Mrs Itoro Eze-Anaba mentioned that the center has its doors open and willing to help survivors pursue cases so that perpetrators are brought to book to serve as deterrent for others with the intentions of violating women and girls.

Eze-Anaba said today, not only girls face this act of molestation, because little boys are also being molested so she called for parents to begin to teach children to speak up and speak out about unusual things around them when they are left with adults because many of the child abuse and molestation happen with trusted friends and members of the family.

Vincent Dania of the African Center for Leadership, Strategy and Development who spoke about Male involvement in eliminating violence against women said In 2018, the Lagos state ministry of Justice, through the  Domestic & Sexual Violence Response Team (DSVRT) handled 930 cases of violence against women, most of the time perpetrated by men.

Dania called on men to put all hands on deck to see the fight to eliminate violence against women and girls reach a meaningful conclusion.

As the first step in involving men and boys for the elimination of VAWG he called on the men to put the problem in the correct perspective and move away from the notion that violence against women and girls is a women’s problem.

He urged them not to be quiet or neutral when a female being violated, enjoining them to talk to family, friends, community members, co-workers and the young people around them about treating women with dignity and respect.

The Spotlight Initiative according to Mrs Josephine Effah-Chukwuma is being implemented in 2 Local Governments in Lagos but she says that Project Alert’s component is being expanded to 9 LGA’s so as to build a wider network of a community of people who would render service in this fight to eliminate VAWG.

The UN General Assembly in 1993 defined Violence Against Women as any act of gender-based violence that results in, or is likely to result in physical, sexual or psychological harm or suffering to women, physical, including threats of such acts, coercion or arbitrary deprivation of liberty whether occurring in public or private life.

The Spotlight Initiative in Nigeria is aimed at supporting a Nigeria where all women and girls, particularly the most vulnerable, live a life free from violence and harmful practices.