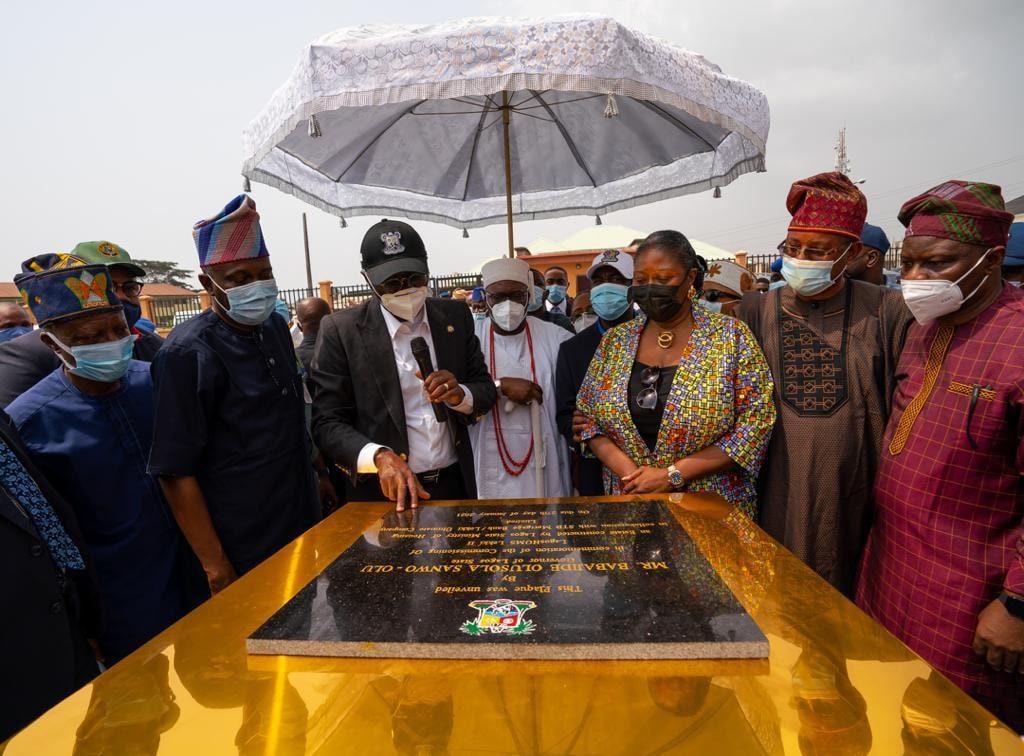 Lagos State, Governor, Mr. Babajide Sanwo-Olu has formally opened two housing projects in Surulere and Eti Osa axes, which were revived and completed by his administration.

These are 132-unit LagosHOMS projects at Iponri in Surulere area, and 84-unit Lekki Phase II housing project in Ikota, along Ajah corridor.

The inauguration of the projects came four days after the Governor commissioned another 252-unit flats in Idale, Badagry. The Iponri and Ajah housing schemes were delivered through a joint venture between the Ministry of Housing, STB Mortgage Bank and Lekki Ultimate Company Limited.

Besides, the Governor also inaugurated and handed over a laboratory and new office complex which Lagos State Government built for the National Veterinary Research Institute (NVRI).

Sanwo-Olu said the resuscitation and completion of the two housing projects further testified to his Government’s commitment to improving the lives of Lagosians through service delivery in the area of infrastructure.

The Governor observed that the quality of the projects delivered indicated that his administration’s promises to raise the bar of good governance was not a fluke, stressing that implementation of his development blueprint – Project T.H.E.M.E.S – would continue to be done in line with needs of the residents.

Sanwo-Olu said the LagosHOMS projects, being supervised by his administration, were being packaged to give citizens comfort through stress-free ownership structure and mortgage scheme.

He said: “Today, we are gathered to mark yet another fulfilment of our promises in the housing sector. At the inception of this administration, we pledged to provide decent shelter for the people. This promise was made out of the conviction that housing is one of the basic needs of humans and a critical factor that determines quality of life.

“In the past months, a lot of efforts had gone into completing many of the housing schemes inherited from past administration. While some of these projects are funded through budgetary allocations, others are being financed through joint venture with our development partners.

“It is with great pleasure that I perform the commissioning of LagosHOMS Iponri by which we are adding 132 homes to the housing stock in this area. Through the same joint venture, we have delivered another 84-unit Lekki Phase II Housing Scheme in Ikota, Ajah. These feats marks successful collaborative effort geared towards bridging the housing deficit in the State.”

As his administration builds and delivers quality homes across Lagos, Sanwo-Olu said his Government is also generating ideas on how it would increase affordability and access for low and middle income families.

Comfortable houses, the Governor said, should not only be for the affluent. He said more convenient ownership packages would be introduced to make more people come on the home ownership ladder, regardless of socio-economic bracket.

Sanwo-Olu charged more private investors to partner with the State Government in addressing the housing deficit, while also reiterating his administration’s willingness to make unencumbered land available for housing development by private investors on the basis of mutually agreed terms.

He said: “As we commission these housing projects today, I wish to express my appreciation for the invaluable support this administration has enjoyed from the good people of Lagos. We will not take this support and goodwill for granted. In spite of the hurdles, our commitment towards actualising the Greater Lagos of our dream is irrevocable. Things can and will only get better.”

Commissioner for Housing, Hon. Moruf Akinderu-Fatai, assured that the Government would leave no stone unturned in providing decent and affordable shelters to all categories of residents in the State.

The comforting features in the two schemes include water reticulation plant, central sewage treatment plant, street light, and leisure facilities, among others.

The NVRI edifice and research laboratory situated on Keffi Street, Ikoyi were built by the Lagos State Property Development Corporation (LSDPC) in fulfilment of partnership agreement entered into by Lagos and the Federal Government to end a protracted dispute over land ownership.

The two-storey complex will now be the new regional headquarters of the Institute founded in 1924.

NVRI Governing Board chairman, Mr. Marlin Daniel, praised Governor Sanwo-Olu for fulfilling his pledge to make the project becomes reality. He said the laboratory would raise the nation’s capacity to bring about cutting-edge research on controlling and providing surveillance on communicable animal borne diseases.

Sanwo-Olu assured the Institute that the State Government would immediately issue title documents on the facility to NVRI to further strengthen the agreement. The Governor also promised to raise funds for the laboratory equipment required to make the Institute functional.

He said: “The NVRI laboratory will boost our capability in the diagnostic aspect of animal health surveillance, while the block of flats is to complement the complex and serve as staff quarters for its workers. We will be supporting the Institute by raising funds to equip the complex with modern and world-class facilities, because we believe in excellence and this has to reflect in all aspects including care for our pets and animals in the State.”

Sanwo-Olu also formally kicked off the construction of Keffi Suite, a housing scheme being jointly developed by LSDPC and Rindsan Nigeria Limited. The project will be completed in 24 months.

Igbos and Yorubas are partners in development, says Ohaneze Ndigbo