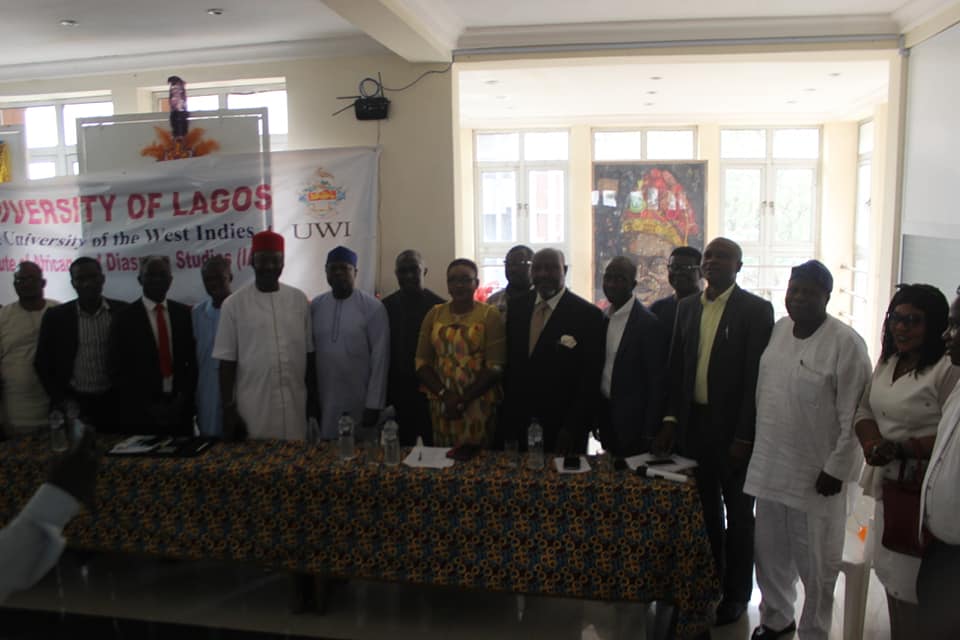 Lead speakers and Participants at a One Day Conference on Restructuring The Nigerian State held at the JP Clark Centre at the University of Lagos have agreed that Nigeria needed some form of restructuring. Most of them believe that Nigeria was grinding to a halt based on its current state.

The keynote speaker and former governor of Anambra State, Dr. Chukwuemeka Ezeife whose paper was entitled; The Imperative, And A,B,C, Of Restructuring Nigeria said Nigeria must be restructured. In his opening remarks;” …There is one truth which cannot be honestly doubted, controverted or wished away:every serious thinking Nigerian, even with minimum sincerity,  knows this bothersome truth: that our dear country, Nigeria, the largest concentration of blacks on the face of the earth, will, without urgent serious political re-engineering or restructuring, go into extinction -cease to exist!!! This is the only truth! Don’t mind some people who talk idly about Nigeria remaining United and being “indissoluble” without restructuring! “

Dr Ezeife whose traditional title is Okwadike Igboukwu noted that God designed for Nigeria unmatched greatness achieve its greatness. He said Nigeria needs her present large size to to develop as a super power.

The former governor who went spiritual in his paper said; God will open the minds of every group to see the group’s greater long-term benefits, in a political re-engineered or restructured Nigeria. God will also give the dialoguing or negotiating groups the mind to accommodate necessary interests. God will forgive those who know the truth, but who, for whatever reasons including clearly myopic delusion supporting the unsustainability of Nigeria.

Dr Ezeife expressed concern that Nigeria in its present structure has failed woefully. He noted that Nigeria which should be providing the template for good governance to Africa and wiping off the shame from the faces of blacks is now leading Africa in corruption and bad governance.

The former Governor of Anambra stressed that restructuring Nigeria simply call for our “going back to the “agreed Nigeria”, that is, going back to the structure or political arrangements of Nigeria as agreed by our founding fathers -our heroes past!”

He noted that “agreed Nigeria”, was a federal structure with regions as federating units. Each region had its own constitution and operated fairly autonomously. The federal government handled issues universally agreed such as external relations, currency, weights and measures, etc.”

Chief Chukwuemeka Ezeife prayed thata God will give Nigerians the understanding, the passion, and determination to save Nigeria by restructuring Nigeria by letting justice prevail in Nigeria thereby empowering Nigeria to develop into a Super Power and achieve its manifest destiny.

Also, Mr Soji Awogbabe, a Trustee of Voice of Reason organization who presented a lead paper entitled; “The Growing Popularity of the Restructuring Ideology ” said the current Nigerian structure was not working. According to him;” …The concept of Nigeria has to be renegotiated. Nigerians must sit down and reexamine the structure known as Nigeria….”

He frowned at a situation where he said that governance had collapsed because Nigeria has grown a Central government that acts as headmaster to the other federating units.

He was of the view that the constituent states must be made to control their destinies…saying it’s inconceivable to hear that it tool a Western Nigeria 40 years to reconstruct the Lagos Ibadan expressway; the same road that is taking the several federal governments 40 years to fix.

In a similar vein, Yinka Odumakin, the Spokesman for the Pan Yoruba organisation, Afenifere;  in a lead paper entitled; “The 2014 National Confab and the Notion of Restructuring ” said the well composed 2014 National conference took far reaching decisions that if implemented will go a long way in dousing the tension caused by the increasing calls  for restructuring.

He said despite the initial lack of trust among the various groups; they ended up trusting each other coming up with workable solutions for a greater Nigeria. Mr. Odumakin said the only way to get Nigeria out of the woods was for Nigeria to restructure.

The four members of the panel of discussants at the One Day Conference on Restructuring of the Nigerian State also agreed that there was need to change how things were currently being done in Nigeria.

Speaking on Restructuring and True Federalism, an Accountant and Petroleum Engineer, Mr Bala Zakka explained that; ” Restructuring is that alignment or process that will change the things that are not going right in a society or organisation for the better. “

He reminded Nigerians that restructuring is that force required to push that docility to make Nigeria to be on the path of positive development.

He insisted that restructuring Nigeria back to six regions with devolution of powers and fiscal federalism will return Nigeria to healthy productive competition of the regions and to the associated economic productivity.

Chief Onovo said restructuring will allow the region to focus on their different comparative advantages and thereby diversify the national economy for accelerated development.

For her part; journalist and activist, Ify Onyegbule said there must absolute civility in the efforts by groups to explain in agreement or disagreement of their positions on restructuring.

Speaking to the topic; ” Trust And Civility In A Multi Ethnic Nigeria “; Ms Onyegbule criticised political leaders who deploy aides on social media with the sole aim of attacking and abusing perceived opponents. She said as public servants they must listen to their constituents and answer the queries rather than hitting back at them at the slightest comments.

Lawyer and Development Economist, Fred Nzeako who harped on the topic; “A Critical Evaluation of the 1999 Constitution ” , was of the view that the 1999 constitution does not sustain democratic ideals in an environment with over 300 ethnic groups and languages.

He said Nigerians needed to take a critical look at the current structure which according to him; “does not aid development “

The organizer of the conference and director at the Institute for Africa and Diaspora Studies at the University of Lagos, Dr Tokunbo Pearse in his closing remarks noted that the devolution of powers to the  states and geo political zones can solve the problem of economic hardship in the country