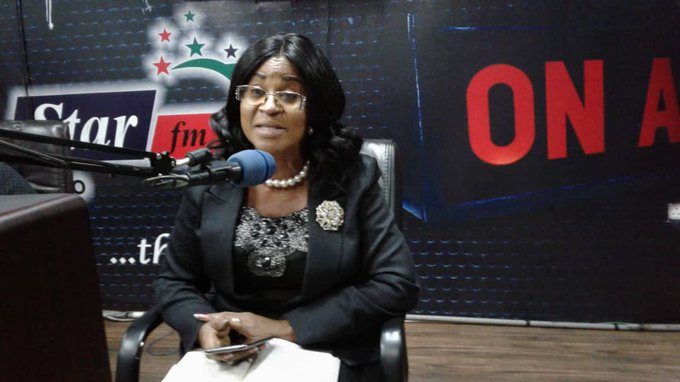 Philomena Nneji, Chairperson. International Federation of Women Lawyers (FIDA) was on the Daily Report on Thursday June 4 for the Spotlight Project to discuss issues around Laws on Sexual and Gender Based Violence.

Nneji confirmed that there are international and national laws as regards punishment to rape but with the laws, cases of rape have still been on the rise, pointing the need for the society to fight hard to have effective implementation of the laws so that those who plan to come into this kind of crime will know they can’t go scot free with impunity.

She noted that the laws provide life imprisonment except when the person who committed the act is someone below 14 years of age.

According to Nneji, “the police system sometimes accepts bribes and compromise for the offenders and that is why NGOs like FIDA are pleading for FIAT, because with FIDA, they can prosecute directly and make sure there is enhanced access to justice and this will act as warning to perpetrators”

Talking about how many people have faced the law, Nneji made reference to one of their magistrates who have spent over 20 years on the bench, saying for the number of years she has spent; she has sentenced only 5 people on the case of rape and most cases of rape gets delayed which in turn waters the matter down.

Relating to the Bukola Dakola’s case, she said lack of evidence can make a lot of things to not come out as expected.

On how perpetrators can be dealt with, The Chairperson of FIDA Lagos Chapter said there is a need for awareness and people coming out to amplify their voices that rape is a crime.

Nneji said FIDA has a project on ground under UN spotlight initiative geared towards putting an end to violence especially sexual and gender-based violence in which rape is part of.

Listing what FIDA has been up to, she said FIDA represents vulnerable members of the public in court for their cases, hold clinics where people come to talk on their problems, provides legislative advocacy, civic education and training, empower women and have an adopted school and FIDA also has a ward in Lagos University Teaching Hospital (LUTH) where they attend to children with special needs and more, all free.

Nneji closed by saying that on the United Nations women spotlight initiative programme, FIDA intends to strengthen relevant stakeholders (those seeking to end sexual violence and promoting sexual and reproductive right of both women and girls) as FIDA will make sure that they look into effective implementations of the laws that will end violence against women and girls.