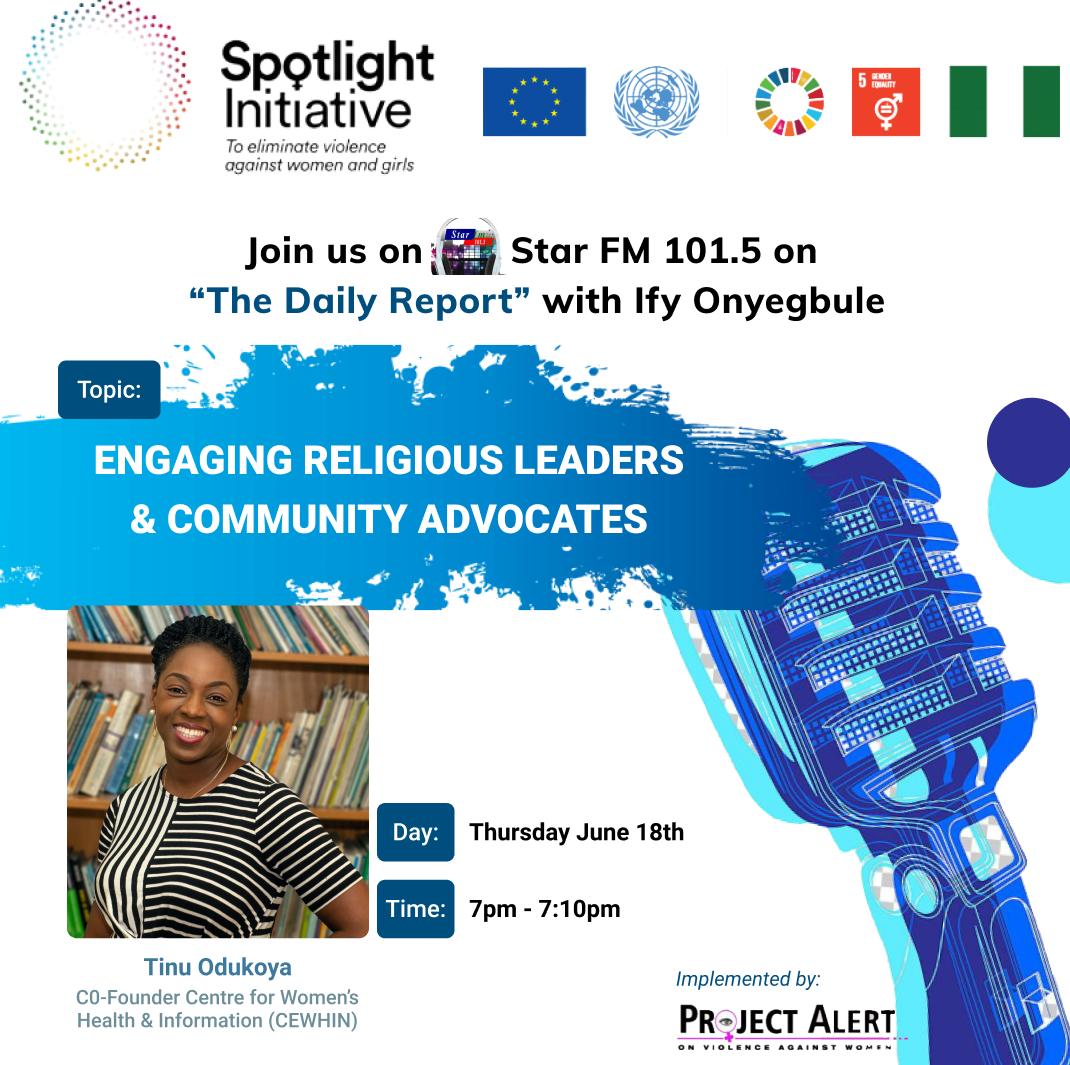 Religious leaders have been called upon to take responsibility in the fight against Sexual and Gender-based Violence against women and girls in the society.

The call was made on The Daily Report on Star FM, by the Co-Founder of the Centre for Women’s Health and information (CEWHIN) Tinu Odukoya, while speaking on the EU/UN Spotlight Project, being implemented by project Alert on Violence Against Women.

Odukoya said the religious leaders are very key in terms of reducing and eliminating sexual and gender-based violence, noting that it is important that they begin to take up the key role because they are central to the community.

“With all the conversations going on around rape and other forms of violence, the religious institutions are central to the communities especially in Nigeria where people are very religious”

“People go to their religious leaders to get advice on various issues so they are very key in the prevalent discussions around gender-based violence” she said.

The best approach to reach the religious Leaders?

Mrs Odukoya maintained that there should be adequate awareness campaign and knowledge sharing with members of the religious institutions so that they have a clear understanding of the issues surrounding sexual and gender-based violence against women and girls.

“Religious institutions aside from preaching forgiveness, owe the congregations the responsibility of seeing to it that perpetrators are held accountable to ensure they are not covered up within their system. They must commit to zero tolerance to any form of sexual and gender-based violence”

She called for capacity building among the religious leaders to raise awareness on the issues, highlighting the need for constructive engagement during trainings on how to handle these issues.

In her reaction to the states in Nigeria that have still not domesticated the Child Rights’ Act, Odukoya said “some of these things are rooted in religion and culture so they assume they are doing the right things and it is often times, a misinterpretation of issues in the case of Child marriages in the North just like down south, where some Christians don’t understand why they should resort to family planning instead of bringing forth many children that they cannot take care of so it is about a mindset thing which calls for a change in behavior and attitude for things to change”

“People need to make informed decisions, it is not about having too many children that you cannot send to school because you don’t have the resources so leaders of these 2 dominant religions need to be enlightened on issues of sexual, reproductive health and gender-0based violence”

The Bible says “tend my Sheep” so for pastors who molest church members, the time is now for people to take responsibility and do the right thing, according to the co-founder of CEWHIN.

“Churches need to come up with security measures to guard against these molestation and parents need to listen to what their children are saying to them in terms of their dealings with their pastors, you listen and follow up wisely”

For the Community Advocates, Odukoya said they have been trained to support community influencers for key and consistent advocacy messages.

She emphasized that the Community Advocates are very important in the scheme of things and the fight against Sexual and gender-based violence.