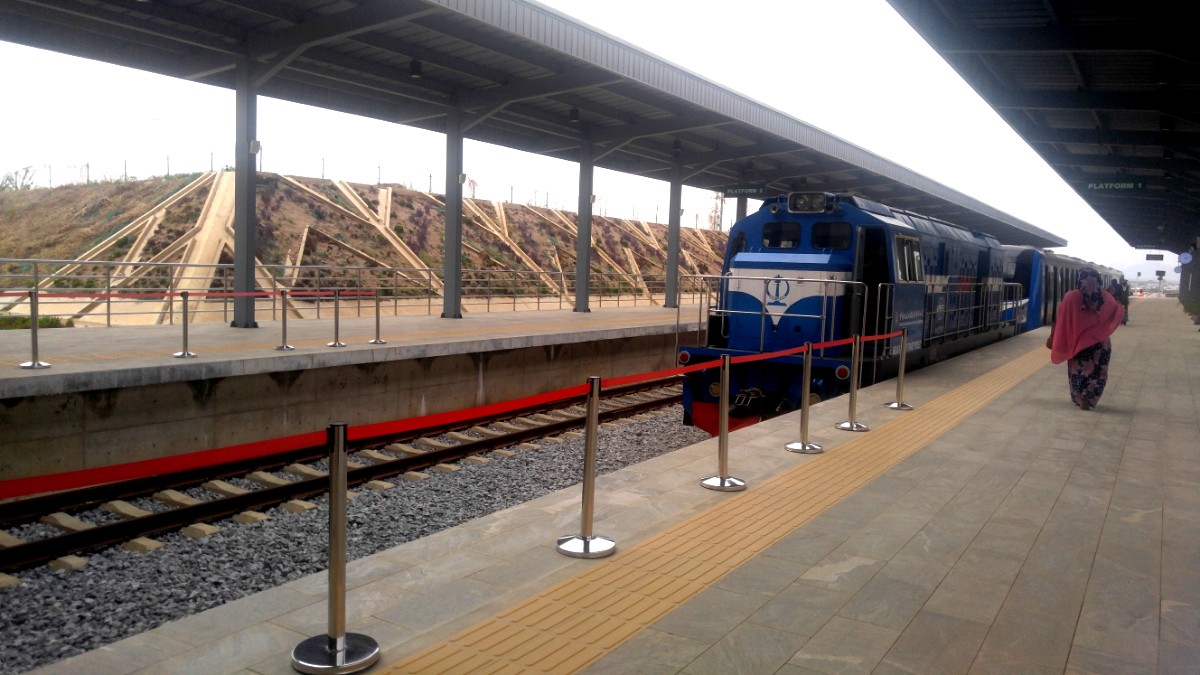 When I was to fly to Abuja earlier this month, price and airline weren’t the only things I considered when I booked my flight online: I took into consideration the services of the Abuja Rail Mass Transit (aka Abuja Metro/ Abuja Light Rail), commissioned in July 2018.

On my last visit to the federal capital in September 2018, I was lucky to ride on it (Yellow Line) at the recommendation of Taiwo Obe, founder of The Journalism Clinic. He was already in the federal capital and I was headed to join him for a media workshop he was coordinating.

My flight touched down at the Nnamdi Azikiwe International Airport just before noon. I waited to claim my luggage and was soon outside the terminal. The official I approached was kind enough to show me the way to the airport train station, which was some 100 metres away. I could see it in the distance to my right, gleaming in metallic grey, the signature look of all the railway- and airport-related structures by CCECC Nig. Ltd., the Chinese state-owned construction company. I pulled my heavy luggage behind me, climbed up a flight of stairs and ambled all the way to the station.

I was somewhat exhausted, but the sight that greeted me filled me with renewed energy. It lifted my spirits. The station was clean, spacious and quiet; the young staff were simply and smartly dressed, in green and white uniforms, and they were very courteous too. In short, everything about the space was so very impressive.

The train was expected back in a little over two hours, the cashier told me politely, and advised that I sit down, like the two passengers that had arrived before me. The next departure, she said, would be at 4:20pm to the Abuja Metro Station, the train’s final stop. And because the service was undergoing a test run at the time, the ticket would be free. A taxi into town would have cost me anything between N3000 and N6000, depending on how further from the airport I was going.

Heaven knew I was in no hurry to get into Abuja, so I was happy to wait, to enjoy the station’s peaceful ambience and the scenic vista as seen through the glass walls. Sitting there felt like being in a solid, static bubble undisturbed by the goings-on outside. I bought a snack and a drink, and picked out a book to read.

Shortly, more passengers arrived, went through the security checks and took their seats. And soon enough, the train itself pulled into the station; minutes later, an announcement was made that we could proceed to board. There were about 20 of us in the train as it set out on the dot of 4:20pm. In all my years of flying in Nigeria, the airlines never depart at the time specified — never! So the train leaving on schedule was a big deal for me, as I believed it would have been for the other passengers.

But something wasn’t right, I thought: why were there not many passengers taking the train? It is common knowledge that Nigerians don’t joke with freebies — or awoof, if you please. There wasn’t enough publicity about the Light Rail, perhaps. The management had better sort that out sooner than later. That wasn’t the time to bother my head about more passengers or publicity, I thought: I settled in to enjoy the ride.

Follow the Nigeria Railway Corporation for updates on its activities nationwide.

And so the train slid through a breathtaking landscape of farmlands, homesteads and an array of granite rocks. I was in awe — my nerves calmed. I soaked in all the sights as the train sped towards Idu, the halfway point and a transfer station where passengers travelling to Kaduna would alight and join another line. Passengers who had arrived at Idu already would board to be taken to the Metro Station.

“This train is a very very good Idea,” Ghali, a staff, told me when the train finally stopped in the Central Business District.

Ghali was a temporary staff of the company managing the railway operations for the time being. As he explained, he undertook a five-month training for the job and his responsibilities included taking ticketing sales records. He combined that with another duty: “I take care of the security of all passengers in the train,” he said, just before I left him for the waiting bus stationed outside.

Security? He didn’t carry any firearm or anything that alerted passengers to his person, but he was with us all the way from the airport station.

On my most recent ride, in May 2019, the landscape wasn’t as lush as it was last time but the same gorgeous views remain on both sides of the tracks: streams, inselbergs, cattle grazing, little brick-and-cement apartments here and there and a second rail track being constructed parallel to the one we were on.

A Nigerian in the diaspora seated across from me and who was taking the train for the first time was visibly pleased. He filmed on his phone for most of the journey, running a commentary of sort and breaking that with video calls to his family and friends to tell them about the stranger-than-fiction experience he was having. I tried not to eavesdrop but I could hear him without making the slightest effort. He was loud, and excitedly so.

“This is as cool as anything you would find in the West, you know,” he said in that acquired American accent. “I like what I’m seeing a lot,” he said. Then he got talking to the lady seated next to him who didn’t look like she was in the mood to chat with a stranger.

“What do you think about this?” he flashed a smile.

“It’s okay — I like it,” she replied, smiling only slightly.

“What do you think of the price though — is it okay?”

“I think it’s on the high side. I take the train everyday because of my work and I pay N1000 both ways. I think a fair price would be N500. That will be okay. That is more affordable.”

The young man went on and on about how he thought the price was right and how he looked forward to his trip to Kaduna on the train in a few days.

More passengers poured in at Idu Station, about 40 of them. I took the opportunity to pace back and forth just so that I could stretch my legs, then returned to my seat. The train arrived at Central Station at 5pm.

Like the last time, a red LAGBUS-type bus was waiting to take passengers into town — Berger, Secretariat and bus stops on the route. “We are working based on the instruction of the honourable minister,” the ticketer said when I asked why the bus was at the station. “We are here three times daily when the train is expected to arrive. And we take any number of passengers who enter the bus, even if they are two or three.”

I was glad to hear that. I was pleased. I was impressed. In the midst of a massive failure of basic infrastructure, it was uplifting to see that something did work as it should.