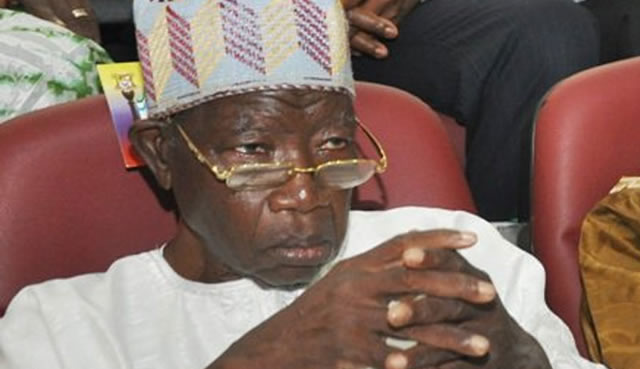 The Death has been announced of the first Civilian Governor of Lagos State, Alhaji Lateef Jakande. He was 91.

The Lagos state Governor, Babajide Sanwo-Olu made the announcement via a post on his verified Facebook page.

Below is the full text from the Governors page.

With gratitude to God for a worthy life well spent in the service of Lagos State, Nigeria and humanity, I announce the death of a venerable statesman, outstanding politician, public administrator and the first Civilian Governor of Lagos State, Alhaji Lateef Kayode Jakande.

Baba Jakande’s record of service as a journalist of repute and a leader of remarkable achievements as governor of Lagos State will remain indelible for generations to come.

His death is a colossal loss and he will be missed.

On behalf of the Government and people of Lagos State, I want to express my sincere and heartfelt condolences to the family, friends and comrades of Baba Jakande.

Lateef Kayode Jakande was born in the Epetedo area of Lagos Island, Lagos State on 29 July 1929. Both parents are from Omu-Aran, Kwara State. He studied at the Lagos public school at Enu-Owa, Lagos Island, then at Bunham Memorial Methodist School, Port Harcourt (1934–43). He studied briefly at King’s College, Lagos in 1943, and then enrolled at Ilesha Grammar School in 1945, where he edited a literary paper called The Quarterly Mirror.

In 1949, Jakande began a career in journalism first with the Daily Service and then in 1953 joining the Nigerian Tribune. In 1956 he was appointed editor-in-chief of the Tribune by the owner Chief Obafemi Awolowo. His editorials were factual and forthright, and were treated by the colonial powers with respect. After leaving the Tribune in 1975, Jakande established John West Publications and began to publish The Lagos News. He served as the first President of the Newspaper Proprietors Association of Nigeria (NPAN).

Encouraged by Awolowo, he ran for election as executive governor of Lagos State in 1979, on the Unity Party of Nigeria platform.  He defeated his opponents, Adeniran Ogunsanya of NPP and Sultan Ladega Adeniji Adele of National Party of Nigeria and was subsequently sworn in as governor. His administration was effective and open and implemented the cardinal policies of his party.

He is credited with the following achievements

He established the Lagos State University.

Jakande’s government constructed over 30,000 housing units. The schools and housing units were built cheaply, but were of great value.

To fund some of the projects, Jakande increased the tenement rates and price of plots of land in affluent areas of Victoria Island and Lekki Peninsula and the processing fees for lottery, pools and gaming licenses.

He also completed the construction of the General Hospital in Gbagada and Ikorodu and built about 20 health centres within the state.

As a governor, he established 23 local government councils which were later disbanded by the military. He also started a metroline project to facilitate mass transit. The project was halted and his tenure as Governor ended when the military seized power on 31 December 1983.