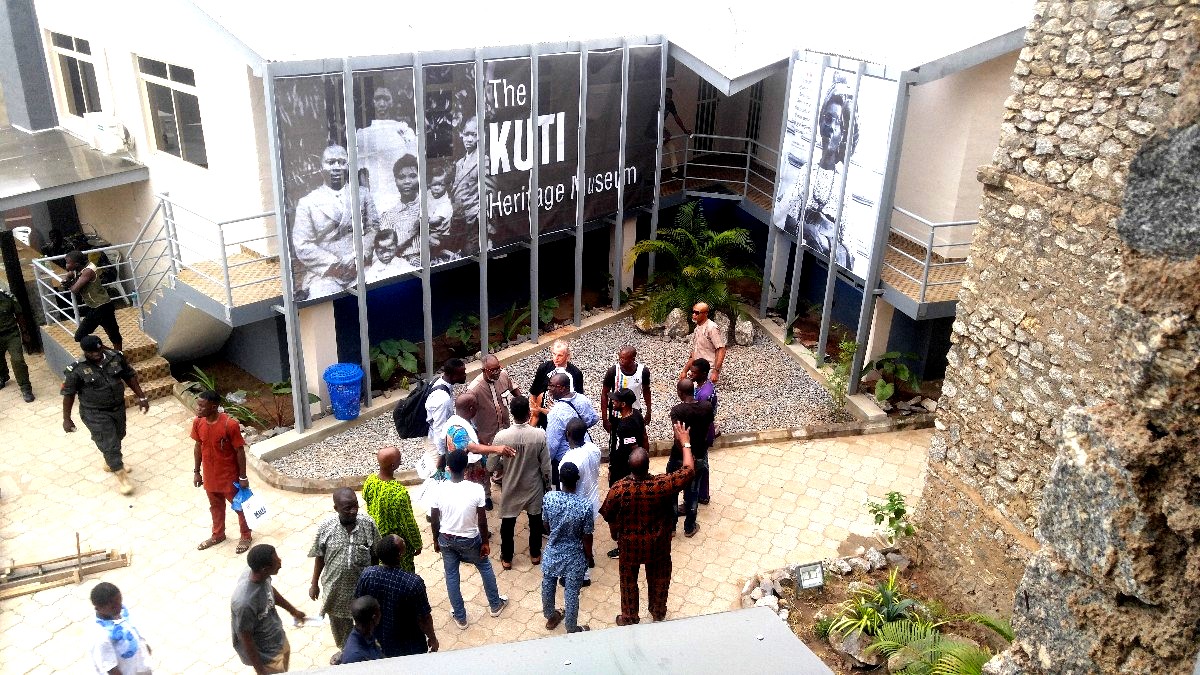 The house where the Ransome-Kuti family lived in Abeokuta (NEPA Road, Isabo) has been converted to the Kuti Heritage Museum, unveiled at a ceremony on Friday 26 April 2019.  After years of neglect, this marks a turning point in the history of the decades’ old stone-building.

Said to have been built in the 1950s, it’s where the late academic and clergy Reverend Oludotun Ransome-Kuti and wife, the teacher and activist Funmilayo, lived and raised their children: Dolupo, Olikoye, Beko and Fela, who would later in life change his surname to Anikulapo-Kuti and found the Afrobeat genre of music.

The one-story building, with an exterior that makes it stand out in the area, preserves some of the family’s household items: antique seats, glassware, beds, dining table, rugs, wall art, family portraits and more. And not to mention the period-defining floor boards, bath tubs, light switches and a narrow, wooden stairway that have been there all along.

The building had been abandoned for many years and it left locals and visitors wondering why such an architectural landmark would be left to rot. Anyone who had visited the premises before would appreciate the museum more. The media also did many reports on it over the years, hoping it would get the necessary attention.

“We thank God that the current government saw the building value and took the step to renovate it, says Abigail Joloaso, who has lived in the area since 1972. “The family and Mrs Funmilayo especially were quite formidable in their lifetime and neglecting their house was not a pleasant way to honour their memory.”

It’s a fact not lost on the governor, Ibikunle Amosun. “This house has a lot of history. This is the house where all the Kutis were raised. From Mama Dolupo to Prof Olukoye, Fela and Beko, who were giants in their own right,” he told the seated guest, after a dance-drama highlighting key moments in the life of Mrs Ransome-Kuti. “When you are writing the history of Nigeria, all of them will have a pride of place. For us, we cannot allow all these giants to be unsung. We don’t want their memories to die and we don’t want our young ones to forget them.”

“This museum symbolises the value that our family fought for,” Yemisi Ransome-Kuti, the head of the family, says in her remarks. “It symbolises that values matter. It is the fact is that it is what you contribute that makes you important — not materialism, not position, not wealth.”

In a brief tribute to his uncle, Professor Wole Soyinka recalled being a student for two years at the Abeokuta Grammar School, where Mr Ransome-Kuti was principal. “He was a leader above all and a great educationist,” Soyinka said, referencing several beatings he received from the man affectionately called ‘Daoud’. “Thank you for this commemoration, and honoring this great family — we all appreciate it enormously.”

Walking through the main building, visitors could literally picture how the family lived day to day. Standing on the balcony, one could almost imagine Mrs Ransome-Kuti standing there greeting and talking to neighbours or addressing members of her Abeokuta Women’s Union (previously Club), whom she led in the late 1940s, to protest unfair taxes imposed on the women at the time.  That move was unprecedented and led to the temporary sacking of the then Alake of Egbaland, Sir Ladapo Ademola II.

Perhaps, the museum’s star attraction is Mrs Ransome-Kuti’s famous white station-wagon, now displayed in a garage in an adjoining building. History records that she was the first Nigerian woman to drive a car.

A third building in the compound, which once served as hostel for the school founded by Mrs Ransome-Kuti, will be a resource centre and houses a restaurant. Clearly, the museum is still a work in progress: some of the dozen or so rooms are empty and will be filled with more family possessions sooner or later.