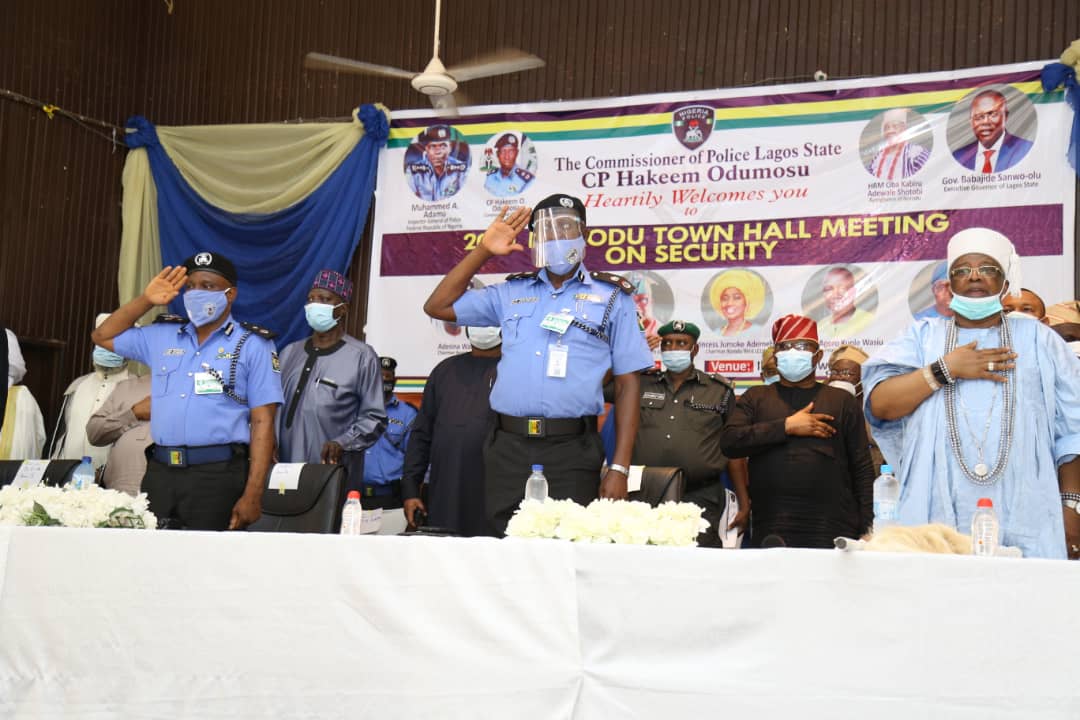 The need to shun crimes and do away with all actions and inaction that can lead to crime has again been re-emphasized by the Lagos State Police Commissioner, CP Hakeem Odumosu.

The CP was speaking on Wednesday 27th January, 2021 at a meeting with stakeholders in Ikorodu Division of the State to x-ray and cross-fertilise ideas on having better security system in the axis.

At the 2021 Ikorodu Town Hall Meeting, which was called at the instance of the Commissioner of Police, Lagos State, after due consultation with the Ayangburen of Ikorodu, Oba Adewale Shotobi, and the Local Government Chairmen in the division, had all parties involved, to deliberate on the security situation in the area and possible solutions.

The Police Boss at the meeting which was attended by the Ayangburen of Ikorodu, Oba Adewale Shotobi and other traditional rulers in the division, sister security agencies, market women, transport unions, youths Council, religious bodies, ethics groups, locally-based security outfits, social clubs and associations and a host of others, noted that all and sundry must condemn the activities of the cultists and miscreants in the division rather than celebrating and encouraging them to do evil.

A statement signed by the Police Public Relations Officer, CSP Olumuyiwa Adejobi said a Communique was issued at the end of the meeting which identified major security challenges in Ikorodu Division to include cultism, land grabbing, traffic robbers and ritual killing.

CP Odumosu after due analysis, suggested the following solutions for better policing of the area.

1. That traditional rulers must embrace community policing strategies and condemn the act of criminality in their areas.

2. Local Government Chairmen to be alive to provision of adequate security for all and sundry in their areas as enshrined in the Nigerian constitution.

3. Landlords in the area to screen their prospective tenants before accommodating and harboring them.

4. The youths must assist the police in flushing out the bad boys who foment troubles in the area.

5. Market women to evangelize community policing principles and try their best possible to support the police and the State Government on security and due compliance with COVID-19 protocols in the state.

6. That transporters must support the police and fight against all vices in the area.

7. Religious leaders to use their links and platforms to preach peace and condemn criminality in the area.

The Police Boss also admonished the stakeholders to support the State Government on the  fight against the spread of COVID-19 pandemic by observing the already laid down guidelines to include use of face mask, social distancing, no social party or gathering,  closure of night clubs, bars, lounges, pasting of “No Face Masks, No Entry” at conspicuous places at malls, shopping outlets, religious centres, offices etc, and obeying the 12 midnight to 4am curfew.

The Ayangburen of Ikorodu expressed profound appreciation to the Commissioner of Police for his commitment to duty and better security of Lagos State. He promised and vowed to deal decisively with any traditional ruler or chief who promotes violence or crimes in his domain.