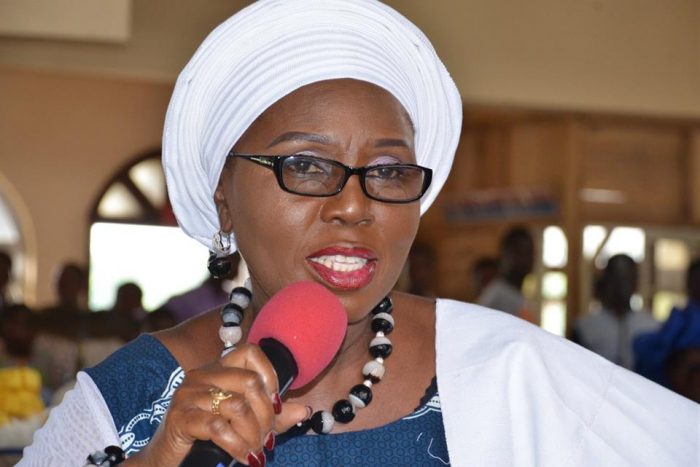 The Wife of the Ondo State Governor, Arabinrin Betty Anyanwu-Akeredolu has stated that strong political will, and empowerment of women were needed to overcome some of the challenges confronting women in the society.

She stated this in Ado-Ekiti at the 4th Ekiti Gender Summit with the theme; “Gender Equality and Women’s Empowerment Post Beijing: Political Will and Impact”, organised by the Ministry of Women Affairs in collaboration with the Forum of Spouses of Ekiti State Officials, FOSESO, and Forum of Women in Leadership, FOWIL.

Mrs. Betty Akeredolu noted that  to achieve a sustainable development in the society, the roles of women must not be undermined and a collective effort must be made to combat what she described as “feminized poverty”.

According to her; “Women just like men can contribute immensely to the socio-economic and political development of Nigeria and must be included in elective roles”.

Mrs. Akeredolu reassured her commitment to promote and sustain initiatives that will elevate the position of women in Ondo State.

She stated that though the Beijing Declaration had brought about positive impacts on gender equality globally, women in most African countries, Nigeria inclusive, were subjugated and suffered from the age long patriarchy.

Earlier in her address, the wife of Ekiti State Governor and convener of the summit, Erelu Bisi Fayemi had explained that the event served as an information, sensitisation and networking platform for people who were interested in promoting gender equality.

She noted that the Summit which commenced in 2010 during the first tenure of Dr. Kayode Fayemi had recorded a lot of achievements in terms of gender equality and women empowerment.

He noted that the issue of narrowing gender gap was everyone’s responsibility  noting that the theme of the summit was in tune with the programme designed for sustainable development in Ekiti State.

Governor Fayemi highlighted some of the measures put in place by his administration to promote gender equality, which included appointments of reasonable number of women into political and elective offices, domestication of gender quality law, and approval of six months maternity leave for women.

The keynote speaker, Prof. Olabisi Aina said the fight for gender equality was not an anti-male agenda, but a duty of all to protect the rights of women in the society.

The event witnessed presentation of awards to Dr. Fayemi and his wife, Bisi, by the United Nations Children’s Fund, UNICEF for their efforts at promoting gender equality in the state.