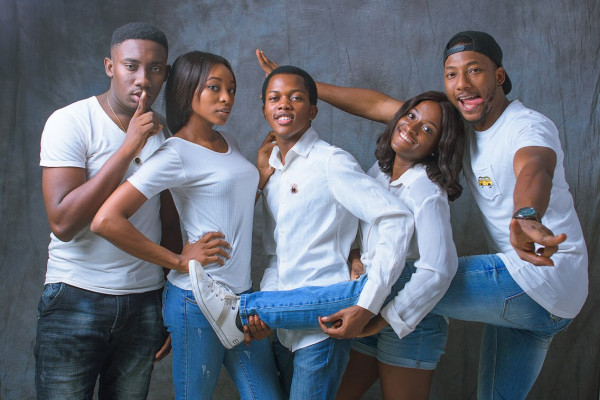 Sometime in 2018, Keke Hammond toured public and private schools in Lagos State with a drama piece about the dangers of underage drinking.  Nothing prepared her for the feedback she and her team got: “While we were in these schools we noticed that a lot of the kids were talking about the access that they had to drugs,”  the certified theatrical teaching artist recalls the experience in front of an audience who had come to see her latest play last December.

Faced with this reality Hammond immediately dropped her campaign about alcohol  and instead began to think of a play that focuses on drug abuse. She discussed this with the actor and broadcaster Ade Laoye who then called playwright Osang Abang (recent credits: Hush, Jemeji and Battleground). At their first meeting, Abang was taken by Hammond’s work with children.

“I felt I couldn’t say no to the project,” he says, referring to that first meeting months back. “We sat down and chatted about teen angst.  I recollect now that as teens our parents sometimes didn’t hear us out and It created a disconnect with them. And so we created the teenage characters and put some drugs in the mix.”

The result is High, a cautionary tale about friendships, peer pressure, loyalty and family.  A production of RUE 14 Studios, it also shows that there is no telling what youths get up to nowadays: In an age defined by social media, smartphones and the internet, that can be quite a lot.

Directed by Kenneth Uphopho (Festival Director, Lagos Frings and CEO at PAW Studios), the play begins in a room in the home of The Baloguns, a not-so-closely-knit middle-class family of four. Kayode (Phillips Francis), the younger of two children has just returned from boarding school, and soon leaves to meet with his childhood friends: Lami (Genoveva Umeh), Cyprian (Abayomi ALvin), Julius (Chibukem Chris-Oparah) and Maimuna (Maggie Osiobor).

Cyprian, an only son who lives with his mother and gets plied with cash to fund his pampered lifestyle, is hosting as always. But Cyprian is the ultimate brat, an adolescent who couldn’t be bothered about his falling grades and ditching his course at a prestigious institution abroad: plus, he only needs to throw a few tantrums and his mother, facing a divorce, will do his every bidding.

“He looks down on everyone else just because he is rich,” an embittered Memuna lets out on one of their get togethers, almost always spiced up with endless drinking and smoking. “And it is not even his money.”

While Cyprian (he prefers to be called Ryan), Joshua and Memuna are streetwise and addicted to drugs, Lami and Kayode aren’t: Lami, the most studious of the lot, is under constant pressure by her mother to read almost round the clock for scholarship and other academic examinations.

“I promised your father at his death bed that I would give you the best education,” Lami’s mother (Najite Dede) tells her at some point in the play.

The wimpy Kayode, who has never smoked or taken alcohol, is reminded often by his stern father (Paul Adams) to be on his best behaviour and take his Further Maths more seriously so he can be admitted to study engineering at a university where his old schoolmate is the faculty head. His mother (Bolanle Stephen-Atitebi) is the classic Nigerian housewife, given to much prayers and almost always submitting to the wishes of her husband, even when a diplomatic dissent would have saved the situation at hand.

But on that fateful afternoon at Cyprian’s, he drinks a punch not suspecting that it’s been spiked. It’s an instant shock to his system and he passes out moments after getting home.

“They said I had enough codeine in my system to knock out three people,” he says at the rehabilitation centre his father, ashamed of the development. has dumped him,

At rehab his condition worsens — no thanks to another shady character in the person of Richard Slow, an addict with a sleek tongue. He it is who sweet-talks the now disillusioned Kayode into taking more drugs, and in the process exposing him to the world of drug-dealing beyond the walls of the rehab centre.

High is a timely play, spotlighting an epidemic and coming only months after a BBC Africa documentary (April 2018) about drugs abuse in Nigeria that sent shock waves through the polity and indicted pharmaceutical companies.

“There are many social factors that have resulted in abuse of drugs,”  says Prof Mojisola Christianah Adeyeye, Director-General of the National Agency for Drugs Administration and Control (NAFDAC) in a presentation at a symposium on the subject at the University of Benin. “These include decline of family value systems, parents not playing their roles properly, children and youth therefore not receiving proper guidance, peer pressure, social media influence, poverty and unemployment.”

And the most commonly abused drugs in the country, she adds, are tramadol and codeine, their production and sale over the counter now banned following the BBC report. “In Nigeria, [codeine]  is regulated as the 50 and 100mg dosage strengths but very high dosage forms of 200mg and 225 mg have infiltrated the market. There is also noticeable increase in smuggling of Tramadol capsules.”

When the curtain falls on High, the audience, some in tears, give the cast and crew a standing ovation and long applause. in the question-and-answer session that follows, they call for parents to consciously create more time to raising their families. “When all is said and done, every society ill can be traced back to that simple entity called family,” says a teacher who has had to deal with many addicts over the years.

“We believe that art is also supposed to be a tool for change and drug abuse is an issue we felt like we wanted to talk about,” says Laoye, speaking as the play’s Associate Producer. “We hope that with this play, we are not just only able to entertain but we are able to provide help to people who might need it. It’s important that this play translates beyond the stage.”