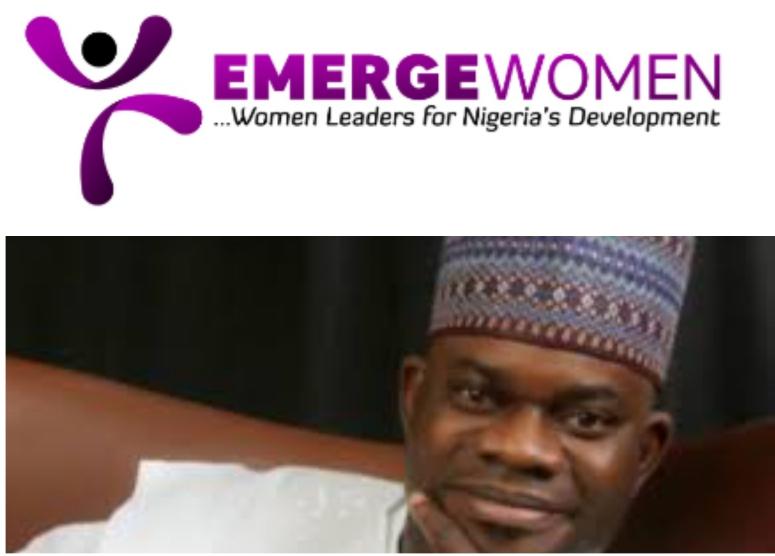 A group of women under the umbrella of Emerge Women, have reacted to a commendation letter written by UN Women to the Kogi State Governor over the appointment of twenty-one women as deputy chairpersons of the 21 LGAs in Kogi State.

In a Petition issued on Friday January 29, 2021 and signed by the President, Emerge Women, Mrs Mary Ikoku and 9 other members and officials of the organization, decried the embarrassing celebration of the appointment of the Deputy Chair persons because “ the laws in Nigeria both at federal and state levels makes provisions for the Local Government Chairmen and their deputies to be ELECTED and not APPOINTED” calling it a huge anomaly to celebrate such a feat.

Emerge women wondered why a commendation letter will be sent to a governor under whose watch as governor, mayhem was unleashed on a woman politician, Mrs Salome Abuh who was burnt to death in her home after the elections in the state.

In the petition, the organization called on the UN Women (Nigeria) to take another look at the Commendation which it termed as ill-advised.

Find below a full text of the letter.

RE: Letter of Commendation and Request for Courtesy Visit by Mrs Comfort Lamptey, UN Women Representative to Nigeria and ECOWAS to HE Mr Yahaya Bello, Executive Governor of Kogi State.

Emerge Women wishes to express our grave concern over the recent commendation letter from the UN Women in Nigeria to Governor of Kogi State, Yahaya Bello and we firmly issue this protest against the letter of commendation and request for courtesy visit to the Executive Governor of Kogi State by Mrs Comfort Lamptey the Country Representative of UN Women to Nigeria and ECOWAS.

We understand that the reason given for the commendation is the appointment of twenty-one women as deputy chairpersons of all the 21 LGAs in Kogi State, but it is our belief that this act does not deserve commendation from UN Women. The laws in Nigeria both at federal and state levels makes provisions for the Local Government Chairmen and their deputies to be ELECTED and not APPOINTED. So, for the UN Women to celebrate these appointments, regardless of their gender, negates the work that we do to ensure that elections at the LG level are credible.

This is one of the issues we have with the UN Women’s letter – we cannot be advocating for credible elections at the LG level and be simultaneously commending a governor who is stifling that process. For us, the act is illegal and therefore the UN Women’s letter is an endorsement of an illegality. The appointment of deputy LG Chairpersons rather than supporting them in running successfully in free and fair elections weakens the agenda on gender mainstreaming into leadership and decision making positions. It also subverts democracy. We ask the UN Women, is expediency now better than insistence on the rule of law?

Albeit, the commendation is premised on the need to encourage the governor on his appointments of women into political office, this cannot be done in disregard of the larger context of the governor’s actions and inactions. Moreover, if that is the compelling reason for the commendation of the governor, it is on record that Rivers State has a woman as her Deputy Governor, female Commissioners, female state assembly member, female Senator, Female Appointees, 1 LGA Chairperson and 22 LGA Vice Chairpersons. To be clear, these women appointments have been in place for many years in Rivers State yet we have not read that UN Women commended the Governor of that state.

We are now left deeply concerned as to why the recent appointment of Kogi women as LG Vice Chairpersons will attract such a commendation. We have many organizations and women working extremely hard in the country to promote women political participation from institutional perspective, but none is yet to receive commendation from UN Women. Under these curious circumstance, It will be difficult to see the UN Women in Nigeria as unbiased. To be clear, the Kogi Governor’s election took the life of a Woman- Mrs. Salome Acheju Abuh, a PDP Woman Leader who was burnt alive to death in her house after elections in Kogi State. Another woman in the person of Natasha Akpoti was viciously attacked and violated for seeking election as Governor of Kogi State. The Kogi Governor’s Commissioner allegedly raped a young woman in the presence of her 3-year-old son without the Governor reprimanding him. In fact he is still a commissioner in Kogi State! There are many other human rights infringements on women in that State which we cannot recount here.

In all these, the UN Women office in Nigeria never issued a press release to condemn these sad events nor offered a statement seeking justice for the women. We believe the UN Women’s commendation is faulty, questionable and unfortunate given the atrocities committed against women under the watch of the incumbent Governor of Kogi State. So long as activists set the bar low, nothing substantive will be accomplished. We cannot say we stand for gender rights and then go out to praise those who brazenly and publicly violate the rights and lives of women.

We are pained that UN Women, an organisation we hold in remarkably high esteem as promoters of women rights globally and partners in progress has embarked upon this compromising and sycophantic adventure in Kogi State. UN Women can ask to meet with Kogi State officials for a discussion without demonstrating such sophistry and sycophancy. Writing such letters and making such pronouncements do significant and irreparable damage to the struggle for gender equality, equity and justice.

We therefore, expect the UN Women office in Nigeria to reconsider this ill-advised idea of commending the Kogi State Governor. We call on all women and right groups in the country and globally to join us in calling on Mrs. Comfort Lamptey, the UN Women Representative in Nigeria to kindly consider withdrawing the Letter of Commendation to Kogi State Governor and a cancellation of the planned visit as a mark of respect for all the women who were victims of political violence and injustice in the last Kogi State Governorship Elections. An injustice to one woman, should be seen as injustice to all.

We would have matched to the UN Office in Nigeria to register our protest but due to the Covid 19 situation in the Country, we have resorted to online actions starting with this release. We and other partners in progress would appreciate a response from Mrs Comfort Lamptey, the UN Women Representative to Nigeria and ECOWAS regarding the issues raised in this statement. Our next line of actions will be determined by the response we get from the UN System, especially the UN Women Representative to Nigeria and ECOWAS.