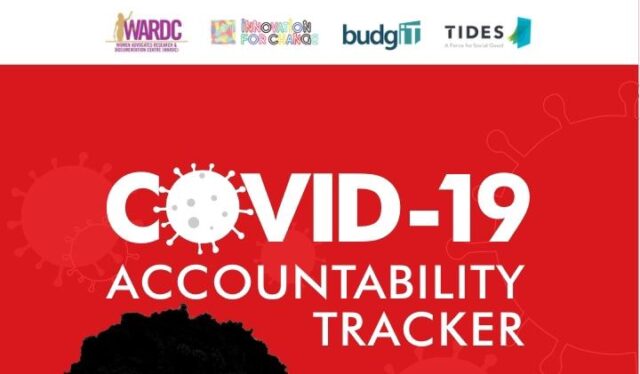 A 2021 Covid-19 Accountability Tracker Report released by Women Advocates Research and Documentation Center (WARDC) has shown that the administration of Covid-19 emergency support services in many states of Nigeria during the lockdown was hijacked and taken over completely by the political class.

The Report also mentioned that the distribution of palliatives became a political item for identified members of political parties.

Recall that the World Health Organization (WHO) and Africa Center for Disease Control led a continental preparedness and response initiative which saw African governments established a taskforce to coordinate the response with the following pillars (a) Enhanced surveillance; (b) Laboratory testing; (c) Risk communication and community engagement; (d) Resource mobilization, among other functions.

To enhance a comprehensive response to the crisis, the Federal Government of Nigeria established the ‘Presidential Task Force for the Control of Coronavirus (COVID-19) Disease’ on March 7, 2020.

Some of the initial measures to address the COVID-19 crisis in Nigeria were enforcement of movement restrictions, lockdowns, contact tracing, distribution of palliatives, among others.

Aside from this, the initial measures to contain Covid-19 was followed by Government’s approval of N15 billion ($38.6) million to support national efforts to fight the COVID-19 pandemic.

How were these monies and palliatives meant for the poor and vulnerable disbursed during the lockdown and how were the poor people identified?

The national Coordinator, National Social Safety Net Coordinating Office (NASSCO) Mr. Iorwa Apera while speaking during a webinar on Transparency and Accountability of Covid 19 Funds in Nigeria said that the social register and the Rapid Response Register has a combined 52 million Nigerians which is more than 60% of the total estimated poor persons. 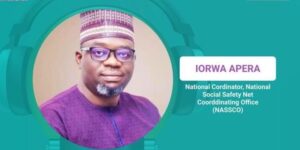 According to Apera, “the Rapid Response Register, a framework for scientific targeting in Nigeria has been put in place to be used in emergencies to reach folks who are impacted in situations like the Covid 19 Pandemic”.

The 2021 Covid 19 Accountability Tracker Report confirmed that there were different channels through which information about palliatives was communicated to the public, but accessibility to those palliatives was a major concern and distribution centres were overflooded with many people stranded for hours to obtain token palliatives being distributed.

In response to the distribution of palliatives during the lockdown, Iorwa Apera maintained that the Federal government through the Ministry of Disaster management and Humanitarian Affairs, mapped out the most impacted states, Lagos, Oyo, Ogun, Abuja and kano and the palliatives were allocated to the areas with the responsibility of the distribution lying with the state governments. 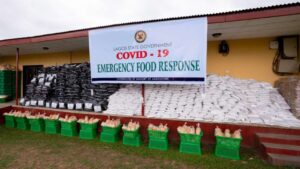 Iorwa clearly singled out Osun state as a clear example of how the Social register was used to identify the poor and vulnerable to distribute the palliatives. He regretted the breaking of warehouses by hungry citizens to cart away palliatives and absolved the federal government of any blame for that breakdown because it was the sole responsibility of the state governments to properly coordinate the distribution of the palliatives.

In tracking Covid-19 funds and donations in Nigeria, The WARDC Reports said “available evidence suggests that apart from donations and grants from multilateral and bilateral agencies, the Federal Government of Nigeria (FGN) created special funds and mobilized donations for emergency response to Coronavirus pandemic (COVID-19) in the country, to which corporate entities and private individuals contributed. It also showed that the funds and other resources were kept as a trust or managed through other similar arrangements, which largely remained unrecorded as they were not regarded as government revenues”.

“As such, the funds and resources bypassed parliamentary budget oversight and government financial management controls and processes. This opened opportunities for corruption and lack of transparency and accountability”

The Report also mentioned that the FG did not carry CSOs along while it was receiving COVID-19 donations or spending the funds. Hence, the anti-corruption protocol for the Presidential Task Force in charge of monitoring procurements and financial transactions developed by ICPC for corruption prevention on Covid-19 relief measures was not far reaching.

“For the cash transfer of 1 million distribution across states it was based on the absolute poverty head count as released by NBS and government used cutting edge technology and satellite images of Nigeria to map out the poor in urban locations using SMS and USSD codes, messages were sent to identified people and they responded via sms and their responses were used to input their data on the registers.

Further findings contained in the Report by WARDC, a regional study that focused on two states – Lagos and Ogun also showed that a significant proportion of the respondents in Lagos (82.5%) and Ogun State (88.8%) had difficulty with getting food and other household essentials during the Covid-19 lockdown.

The Report said that responsibilities of the govt were not carried out during the lockdown period, especially on issues relating to support services and health care. Private organisations contributed cash and materials to alleviate the hardship imposed on the people due to abdication of govt’s responsibilities.

OTHER FINDINGS IN THE REPORT

At least three in every four (78.4%) of the respondents in Lagos State and 80% in Ogun had a negative perception on how the government respond to the healthcare and basic needs of the people during the height of the Covid-19 pandemic lockdown.

2.5% and about 2% of the respondents in Lagos and Ogun State held positive view on how the government responded to the basic and healthcare needs of the population during the same period respectively

66.7% and 70.2% of the respondents in Lagos and Ogun State admitted that they were aware of the specialized committees established by the government to oversee the distribution of Covid-19 relief materials provided by the government and other concerned organisations.

48.1% and 50.9% of respondents in Lagos and Ogun State had knowledge of the specialized anti-corruption agencies, and the functions assigned to these bodies by the law of the land.

PARTICIPANTS RESPONSE DURING THE WEBINAR

At the Webinar on Transparency and Accountability of Covid 19 Funds in Nigeria, participants after digesting the report, agreed that things would have been done better by the Government, CSOs, NGOs in the disbursement of funds and palliatives during the lockdown.

Now that the pandemic is easing, how is the ministry of humanitarian affairs accelerating a process where a framework for handling emergency donations viz a viz food donations mechanism is developed where stakeholders are carried along such that there will be transparency and accountability for managing future emergencies.

The said methodology used in registering the urban poor beneficiaries could be faulted. This is why only few people in some regions benefitted. Data generation should not wait for when there are emergencies. Lessons to learn from that is that we should start generating statistics bearing in mind the demographic characteristics of the nation. I will advise that they need to update the statistics as many households were not captured based on comments from people.  As someone in the development, many households are not captured and do not benefit from the programme. Hence, the need to update. This is why government needs to work with CSO, who work directly with the people.

how is it possible to still feed children that were at home during the pandemic? another thing, the data of the people that benefited. how were they gotten?

There are areas we need to focus on with respect to accountability: Improve local governance, public service delivery in basic services. Procurement and disbursement processes, personnel management – recruitment, deployment. Appropriate targeting. Follow up on utilisation of funds disbursed by recipients;

Transparency International report in my opinion, not a true gauge for our corruption situations in Africa. The issue of information asymmetry is still huge problem in Nigeria. It could be deliberate attempts for government to keep the people away from the truth.

The register is indeed a great idea and should be carried on. Keep it up! As this happens, hopefully it’s capable of accommodating such citizens as the homeless, street people and other very vulnerable groups. The strength of a government is its capability to take care of all its people especially the most vulnerable. 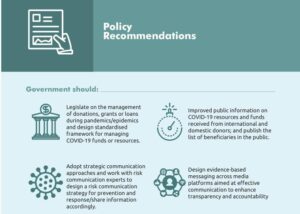 Government was enjoined amongst other things, to adopt strategic communication approaches and work with risk communication experts to design a risk communication strategy for prevention and response/share information accordingly and also design evidence-based messaging across media platforms aimed at effective communication to enhance transparency and accountability.