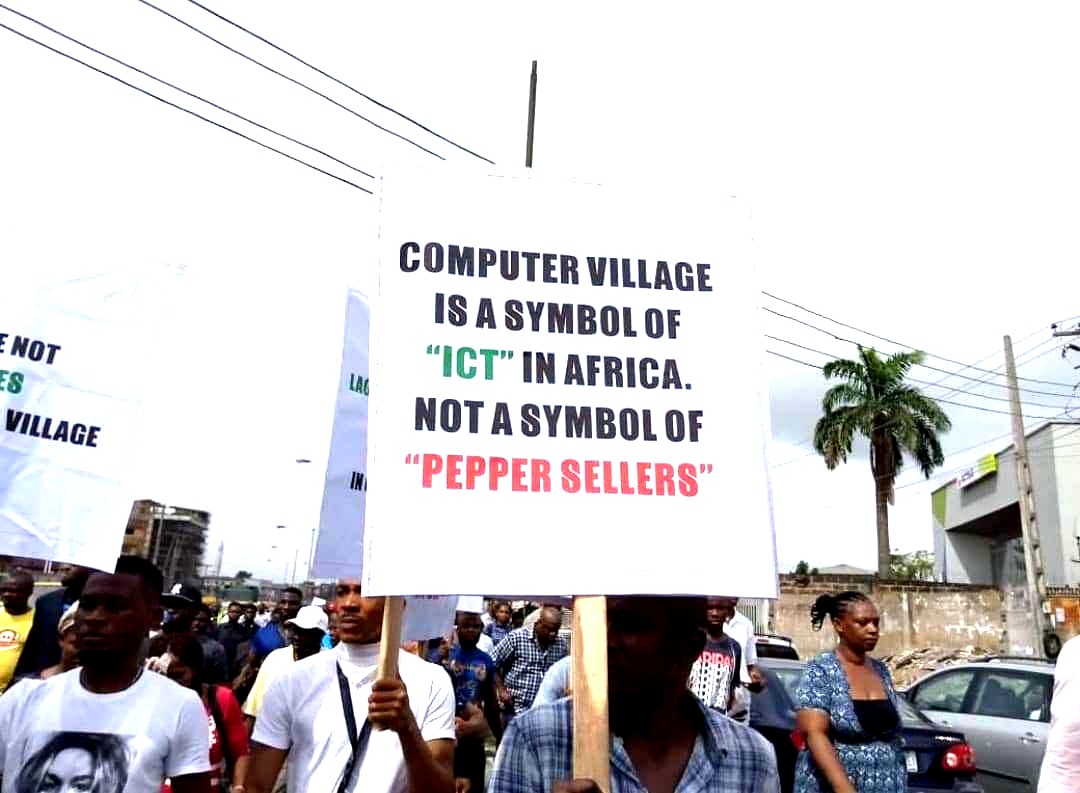 Most of the listeners who tune in to The Daily Report one-hour programme on radio have said that the Computer Village market in Ikeja CBD does not need Babaloja and Iyaloja appointed to oversee their affairs. They made this known through tweets, whatsapp messages and phone calls call while the  programme lasted (7pm-8pm) on Thursday 2rd May.

“I think computer village does not need any baba oloja or Iyaoloja,” tweets Oba Olatunji, minutes into the programme. “The government didn’t build the market so there’s no point for imposing babaloja or iyaloja on the people. Let them go to the ICM to declare Iyaloja or babaloja, or ain’t they selling commodities there?”

Dolani Robert, a regular contributor, tweeted: “How can we have Iyaloja and Babaloja in such  an iconic Tech hub like the Computer Village for God sake? Are we progressing as a serious state with status of Megacity in the making? What exactly is their interest in all these iyalojas and babaloja that serves no meaning to people?”

In a subsequent tweet, he added: “This is an example of extractive renting seeking political arrangement. Selected representatives will only protect the interests of the person who selected them. The interest of the marketers won’t matter at all Computer Village.”

“What is iyaloja, [and] what’s their use?” another listener wondered. “It’s only in Lagos you see them setting illegal offices and putting dubious people so they can impose rubbish & collect money from people. Lagos is just nasty to stay or do business. Very soon they would collect money for breathing.”

A few listeners, however, took a different view, supporting the plan to appoint Iyaloja and Babaloja for the market, located in Ikeja. “There is a law in a state. If you are not ready to abide by it, then leave to another state. It’s that simple,” a caller said.

His opinion was supported by Olalekan Isaac. “I believe Ikeja computer village is constituted of group of different trade union registered by law and regulated by CAMA of the CAC,” he argued. “To me iyaloja is a customary issue. Let the laws of the land be tested. This will further enrich our jurisprudence. Lets seek legal interpretation.”

One listener, Canice Ifeanyi had a question, though: “In Ladipo market, do they have iyaloja and babaloja? If not, why bringing it to computer village?

Last week, news broke that traders doing business in the Village, bearing placards, protested against the plan. Reacting to the development, the Iyaloja General of Lagos, Folashade Tinubu-Ojo, said she planned to go ahead with the appointments.

“Computer village is not just an ICT hub, there are a lot of commodities being sold there; nobody can say it is wrong to select a Babaloja and Iyaloja for the market,” she clarified in a press conference.