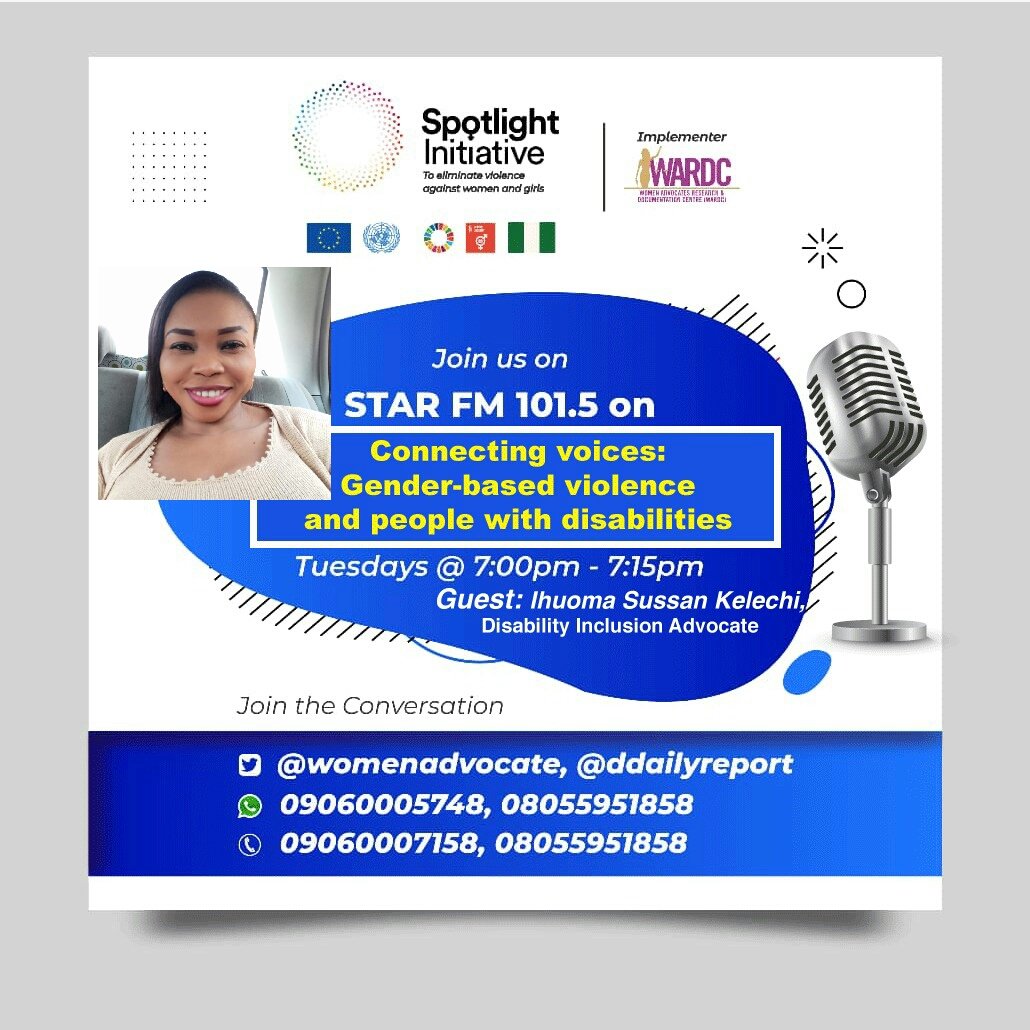 Persons living with disabilities have expressed worries over the spate of gender violence going on in the society especially with Women living with Disabilities.

A Disability Inclusion Advocate, Ihuoma Susan Kelechi who was guesting on the Daily Report on Star FM, for the Spotlight Project being implemented by the Women Advocates, Research and Documentation Center (WARDC) said it is tough to be in their condition, she continues “we are incapacitated because we need people to help us do things and I look at it, if these people who have their hands and legs and can even try to defend themselves are brutalized, raped and killed, how much more those of us with disabilities in different institutions, in their homes and in different places”

“Even with the figures that we see today, no one has come up with details of how many women with disabilities are abused per time”

Susan Kelechi said as a woman with disability, it has been difficult for her to navigate through life with the patriarchal nature of our society and she said you find people speaking about women but “who speaks for women with disabilities?” she asks amongst other questions.

Ihuoma recalls the pain of being disengaged as a data Management Officer alongside other volunteers, who worked for the Lagos State Volunteer scheme in the last dispensation and she said he hopes were dashed being the only volunteer with a disability, hoping she would be retained on compassionate ground but that never happened.

“Stigmatization is a big issue even from family members, who hush you from speaking up when you are sexually molested or abused they try to make you feel your molester or perpetrator is doing you a favour by his actions”

“Nobody is doing you a favour by marrying you and traumatizing you everyday, that is what I try to tell women living with disabilities”

How Do We Break The Culture of Silence?

Kelechi believes everyone needs to take responsibility and understand that persons with disability are also human beings, it is important to care about them and what they face, she says.

“Daily I share my challenges with women living with disabilities who come to me with one complain or the other and I tell them how I overcome my challenges.

Kelechi called on government to make sure that perpetrators of violence against women with disabilities are brought to book to serve as a deterrence to others nursing the idea of abusing other women in the same condition.

Find the full Video of the Spotlight Project here.