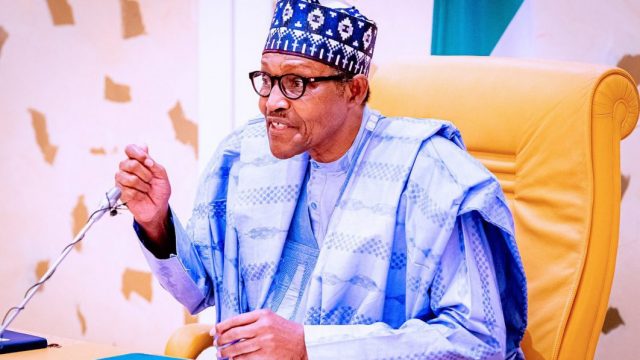 President Muhammadu Buhari has addressed subjects bordering on the Twitter suspension, IPOB, the insecurity pervading the nation, the dwindling economy, and corruption in Nigeria.

Buhari was speaking in an interview with Arise News Chairman Nduka Obaigbena, TV hosts Tundun Abiola, Reuben Abati, and the Head of the Editorial Board of ThisDay, Olusegun Adeniyi.

Find below, the answers/reactions of the President on the following issues –

We have changed Service Chiefs, who were also part of the system during previous tenures and tasked them to go round the country and make changes where necessary. We can’t divulge what they are doing so as not to make the bandits aware of our strategy.

The important thing is local security operations. We have police in every town and I’ve been pushing them to sustain their work. Bandits are experiencing heavy casualties.

I’ve told governors who came to me to complain about herders and farmers crises to go back to the old system where traditional leaders, police, traders and elders meet regularly to discuss security situation in their localities and solve them. And if it is above them, they pass it on. Governors can’t go round and win elections and then sit tight and wait for somebody to do their jobs for them.

We are impressed with Nigerians who went back to the farm. We made sure our neighbours especially Niger Republic understands it. The Niger government cooperated with us. (Fighting) corruption is very difficult under this system (and even under the military system). But in this system, doing things with immediate effect is not possible because those who have the money can hire first class lawyers and cases may take 10 years. I assure you, despite the problem with the system, if we have correct intelligence that someone is not accountable, we ease them out. Those in top positions in my government know this.

Governor Zulum of Borno told me Boko Haram are Nigerians. You can’t kill innocent people and say “God is Great”. We have problem of unemployment. The level of poverty is almost unimaginable. Those who are really keeping in touch with what we are doing, know the difference between when we came in and now. The people in North East and South South can tell you the difference.

What I did was ask governors to go and dig the gazette of the first republic. There are cattle routes and grazing areas. If you allow your cattle to stray into any farm, you are arrested. The problem is trying to understand the culture of the cattle rearers. The Nigerian cattle rearer has nothing else about from machetes and sticks to cut trees for cattle. Fulani herders from outside Nigeria (who look the same as Nigerians) move to Nigeria and they look like they are from Nigeria and some of them carry AK 47.

The problem is the local government has been virtually killed because those who became local government chairmen have been compromised. If you LG is entitled to N300m, a letter will be prepared for you to sign that you’ve received N300m and you’ll be given N100m.

PROTECTION OF CHILDREN AND SCHOOLS AND LIFTING FAMILIES OUT OF POVERTY

Try and appreciate FG’s efforts – change of service chiefs, e.t.c but we don’t want to give publicity to their strategy so as not to make real criminals aware. We’ve given security agencies the go ahead to treat criminals everywhere in the language they understand and, in a few weeks, you’ll begin to see results.

IPOB is like a dot in a circle, if they want to exist, they’ll have no access to anywhere. And the way they are spread all over the country, having business and property, I think IPOB doesn’t know what they’re talking about. Anyway, we’ve said we’ll talk to them in the language they understand, we’ll organise the police and military to pursue them, that’s what we can do and we’ll do it.

I’ll keep it to myself

INCLUDING SOUTH EASTERNERS (AND THE SOUTH IN GENERAL) IN GOVERNMENT

Positions in government/military have to be earned. You can’t just pick somebody to balance up. People have to go through the system to rise up.

CORRUPTION AND MEMBERS OF OTHER PARTIES JOINING APC

Because one or two governors joined APC? What this administration can do is make sure APC lasts beyond this admin. That’s why the party is doing registration at all levels. However, you’re being very unfair to us when you say joining APC makes all your alleged corrupt practices go away.

Let’s allow the party to decide. We started from bottom up. The party committee has from now till end of this month to come with a strategy for general elections. Those who want to be president, they better join APC

You remember (during the End SARS protests) the young people who wanted to march here and remove me? Tell the youths, if they want jobs, they should behave themselves and make sure the environment is secure so people can invest. Nobody will invest money in an unstable environment.

Ask the previous governments who earned more from oil where the money and/or infrastructure is. We are building roads and rails. No country develops without infrastructure. Did you ask those before me what they did with the money they earned? There have been a lot of waste.

How many neighbours do we have? You have to cultivate your relationship with your neighbours, if you don’t, you are in trouble. Nigerians have first cousins and relatives in Nigeria, Benin Republic.
Niger has discovered oil, we want them to transport their products through Nigeria instead of Benin by building rail (to Maradi) and good roads.

WHAT NEXT AFTER OFFICE?

I’ve never abandoned my farm. When I leave office, I’ll go back there and keep myself busy. For now, I’ll keep trying to convince Nigerians that I mean very well. I want to make sure Security, Economy and Fighting Corruption, there are visible changes. On security, we’ve done well all over the country, just the North West is trying to overwhelm me.

I’ll allow Nigerians to say it. I hope they’ll be fair to me. I want them to analyse how things were when we came in and how they are when we’re leaving.