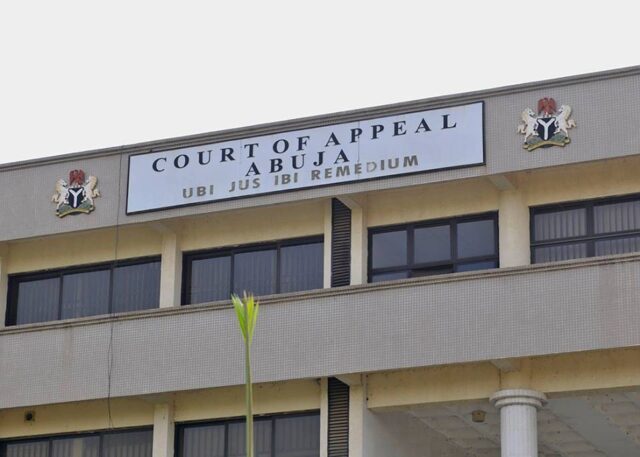 The Court of Appeal  in Abuja on Wednesday(11.05.2022)  held that the provision of Section 84 subsection 12 of the Electoral Act 2022 is unconstitutional.

The Court ruled that 84(12) violates Section 42 (1)(a) of the Nigerian Constitution and denies a class of Nigerian citizens their right to participate in elections.

The judgment followed an appeal marked: CA/OW/87/2022, which was filed by the Peoples Democratic Party (PDP).

The Appeal Court also set aside the judgment of the Federal High Court sitting in Umuahia which voided the same provision of Section 84(12) of the Electoral Act 2022.

In the judgment on Wednesday at Abuja, a Three-Member Panel of the court headed by Justice Hamma Akawu Barka held that the High Court, Umuahia had no jurisdiction to have entertained the case because the plaintiff, Nduka Edede, lacked the locus standi to have filed the suit in the first place.

The Court of Appeal struck out the suit marked: FHC/UM/CS/26/2022 which Edede filed before the Umuahia court.

Nonetheless, while determining the appeal filed by the PDP on its merit, the appellate court agreed with the lower court and held that the provision is unconstitutional because it violates Section 42 (1)(a) of the Nigerian Constitution as amended.

The Court of Appeal held that the controversial section denied a class of Nigerian citizens their right to participate in elections.

Recall that a High Court in Umuahia, had in March, 2022, struck down section 84(12) of the Electoral Act 2022 and ordered that it should be deleted by the Attorney-General of the Federation for being inconsistent with the Nigerian Constitution.

Barely 24 hours after the judgement was delivered, the AGF, Abubakar Malami, SAN, announced his decision to immediately comply with the court order.

President Muhammadu Buhari had before assenting the Electoral Act Amendment Bill 2022 into law, also expressed his reservation over that portion of the electoral law, which he described as discriminatory.

Specifically, section 84(12) of the Electoral Act, 2022, made it mandatory that political office holders must first resign from office, before they could vie for any elective position.

It reads: “No political appointee at any level shall be a voting delegate or be voted for at the convention or congress of any political party for the purpose of the nomination of candidates for any election.”