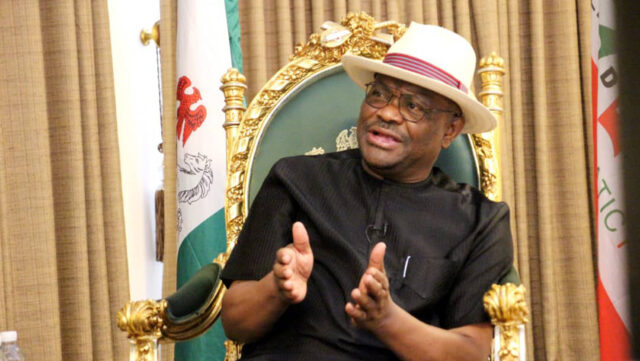 The All Progressives Congress, APC, has called on churches in Rivers State both Orthodox and Pentecostal to desist from offering their pulpits as platforms to politicians such as Governor Wike to abuse and insult perceived opponents.

The State Publicity Secretary of the Party, Senibo Chris Finebone in a statement said the St Paul’s Anglican Cathedral, Garrison, in Port Harcourt gave  Governor Wike the opportunity to speak during a Thanksgiving service last Sunday;” he started to curse and rile in his characteristic savage manner”.

“The height of his usual uncouth vituperation was when, right in front of the Lord Bishop of the Niger Delta North Diocese and that of Bishop of Ikwerre Diocese, Gov Wike invoked thunder on the Ijaw National Congress,(INC) that had earlier given the governor a 48-hour ultimatum to release one of their own,Dr Farah Dagogo from incarceration ordered by the governor…Thunder fire you and ultimatum”, the governor cursed”.

Chris Finebone goes on to say that; ” The argument that the governor spoke from the church lectern and not from the pulpit is disingenuous and not very smart. The pulpit is only a symbol. Any one speaking or ministering to the congregation in a church irrespective of whether from the lectern or wherever is speaking from the holy pulpit of God”.

The APC called on, “the clergy to desist from offering their church platforms to individuals with track record of irresponsible verbal incontinence like Gov Nyesom Wike from desecrating the church pulpit in the name of politics”