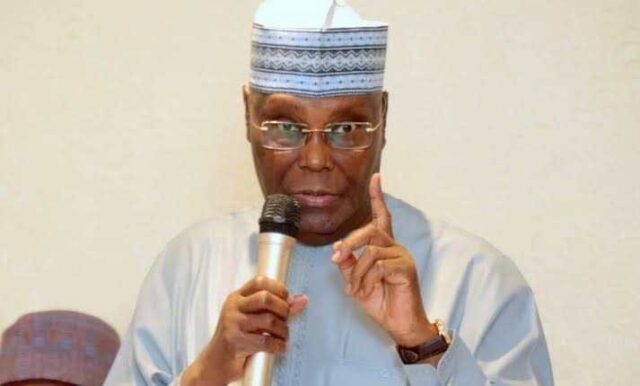 PDP Presidential candidate in the 2023 election, Atiku Abubakar has promised to give every part of Nigeria a sense of belonging if elected as President in 2023.

Atiku who was the special guest at the Nigeria Editors Forum held in Ikeja, Lagos said he will form a government of national unity if elected as a way to further unify the country.

The former vice President promised to ensure that every geo political zone is represented in the hierarchy of the security forces and paramilitary services.

The PDP Presidential Candidate also told the Editors that he will not forget to have at least 35 percent representation women in his government if elected as president in 2023.

On restructuring, the former V.P said he would present a draft copy of a bill on restructuring, devolution of powers and resource control to the national assembly to consider an amendment of the constitution if he is sworn in as president.

Atiku said he will give priority to the security because all the zones of the country were experiencing one form of insecurity or the other.

Earlier in his opening remarks; the President of the Nigeria Guild of Editors, Mustapha Isah again called on politicians to address issues , avoid attacks and false claims against their opponents as they carry out their campaigns.

Isah explained that the Nigerian journalists have pledged to be neutral on all political matters but will stand by the Nigerian people at all time who are on the receiving end.

He said journalists will continue to take actions that will protect the democratic values of the country especially as stakeholders.

Mustapha Isah stressed that the Editors forum provided politicians and other leaders the opportunity to present their manifestos, programmes and policies on their plans towards the survival of Nigeria.