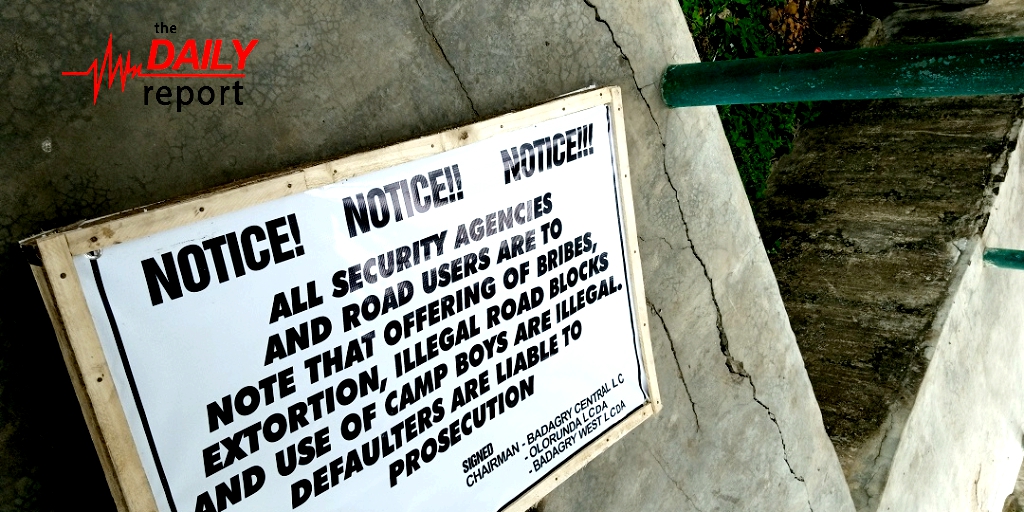 For commercial vehicle drivers plying the Agbara-Badagry-Seme highway, their situation can be likened to the late Fela’s popular song titled “suffering and smiling”. That’s because apart from having to travel the deathly 26km distance on very rough roads, they also have to bear the pressure of multiple federal military and para-military law enforcement officials extorting them daily.

To experience the drivers’ torment first-hand, The Daily Report sent Medinat Kanabe to travel as a passenger on that route. What follows is the second part of her report, made possible with the support of Google’s Journalism Emergency Relief Fund (JERF)

An unending cycle of shakedowns

“Dem dey collect money every day by day and if you no give them gan dem go spoil something for your motor,” one of the drivers told me. “See (pointing at his bus) look all those side mirrors, all those pointers, na dem dey scatter everything. Apart from Agbero (touts), police their own too much for this road. I will not lie to you and if we say we no get money, they go carry our motor go station.”

All the drivers I spoke with had the same story of agony to share but chose not to be photographed fearing for their safety.

“The policemen know us and they can harm us,” one told me. “Starting from roundabout to Agbara we pay N1500 and we must carry three on a seat, because if we carry four they will arrest us. If our passengers don’t wear face mask they will also arrest us. Please we want the government to do something about it.”

Another driver: “The thing too much for our body. From morning till evening all the money wey we dey make, half na our own, half na for police. The worst thing be say the road no good and e no concern them, so if your motor spoil for road, you fit no carry any money reach home.

“We must pay Agbero and local government ticket and still, some police dey collet 200, some 100 and customs dey collect N500. If you no give them they fit delay you until their duty finish before you go start work,” he added.

“They are a threat to our lives”

One driver in particular hinted that the extortion is responsible for the continuing increase in transportation fare on that axis.

“Before, we dey carry Badagry to Mile 2 N300 or N400 but as the checkpoints dey increase every day and with the bad road, na so the fare dey high.

An elderly driver said: “we have issues with police on this road. They don’t give us peace of mind, in fact they are a threat to our lives and all the money we make every day goes to them.

Before December last year, according to another driver I spoke with, there were about 11 check points on that road.

“But I fell ill and was in the hospital until April this year when I started coming out again and was told that they are now 16 checkpoints on this road,” he said.

“We pay N100 and N200 in some points while the custom officers collect N500, but the Area K police station collects 200 and they are stationed after Mowo bus stop. They collect the money twice a day, in the morning and in the night. They resume between 7.30 to 8am and leave at 6:30 pm while the afternoon batch resumes at 6:30 and leaves at 7:30 am.”

A driver who didn’t want to talk much said: “what we face is more than what our mouths can say. From Agbara to Badagry they are up to 10 and the Road Transport Employers Association (RTEAN) is not doing anything about it.”

A driver who feels it is the fault of the federal government said: “Saying how the driver feel is an understatement. You should know how they feel because you boarded a vehicle as a passenger and I believe what you saw made you sad that is why you are asking me these questions.

“If there is another word to qualify anger or sad or unhappy that is what we feel. From roundabout to Agbara they are there collecting money. I believe it is because we don’t have the federal government presence here in Badagry.

“We blame the police for what they are doing but if they are not there the robberies on the road will be high.

“I may not be able to freely go on a trip and come back without been harassed or robbed so they are there also for security purpose.”

Powerless against the uniform

A young driver who was seen fixing his car at a mechanic workshop said the way the different military men are collecting money from drivers is so much that the drivers cannot meet up with their responsibilities.

“The road is bad and the checkpoints are too much. We want the government to help us especially concerning the Area K Police Station and border patrol men. Normally from here to Agbara is supposed to be N200 but now it is 500. The passengers are the ones paying the money we use to settle. Police collect N100 some N200 depending on which bus stop.

“If your passengers pay N2500 and you settle all the checkpoints you can imagine what little will remain. The road is also really bad so people who are into transportation here are suffering. If our vehicles spoil we find it difficult to raise money to fix it,” he concluded.

I decided to take another trip two days after my initial experience of goings-on on the highway, but this time from Agbara to Badagry and in a vehicle belonging to a private driver. I settled for the back seat.

This time the driver didn’t go straight, he tried to avoid the Area K Police Station and took a turn by the street at Magbon bus stop.

“We dey run from Area K Police officers,” he apologised to passengers with an explanation. “If I don’t go and pass inside that place the money I had on me would finish.”

He wasn’t as lucky as he had hoped. A few metres away, policemen were waiting on the inner streets. Left with no choice, the driver settled the police and moved on, collecting his allotted numbers (which he jotted down).

Curious, I asked him how he manages to remember the numbers.

“You must not forget the number if not you will pay twice and you must not tell a lie or you will be impounded. We still don’t know how the policemen are able to know when we lie so we dare not.”

The chairman of the Badagry LGA wasn’t on seat when I visited. When I contacted the Police Public Relations Officer, DSP Bala Elkana, his response to me was: “Good evening madam, Lagos has a new police spokesperson. You will need to redirect your inquiry to him. We are concluding the formal handing and taking over tomorrow. Thank you for your understanding, please.”

“Good afternoon madam. Your observations above are mere allegations that we need to investigate because the sector commander and my humble self are not aware of this. It will be forwarded to the appropriate department for investigation,” she said in a message. “Please note that FRSC men on patrol are duly assigned for any patrol but if they are involved in any sharp practises we have appropriate sanctions if they are found guilty,” she said.

While responding to my questions, the Seme Border Area Commander, Nigeria Customs Services, Hussaini Abdullahi, said the Nigeria Custom Service will not deploy any officer on the road to collect money.

“We are saddled with the responsibility of generating revenue for government, supress of smuggling and facilitate trade. If you find any officer collecting money from any passer-by, any traveller or any passenger; I will need evidence to prove that but I want to tell you that no Custom officer will collect money from anyone on that road.”

On his part, the immediate past member, Federal House of Representatives, Hon. Joseph Bamgbose, said he is not aware that drivers are being extorted on the road.

“I am not aware that they are collecting money from them but I thank God that there is peace in this part of Lagos. The policemen on that road are there to secure lives and property. Those people are working and I don’t think they ask money from anybody, they don’t,” he noted.

The representative, Badagry Federal Constituency, Hon. Babatunde Hunpe, said a lot has been done about the check points on that the road. “Even all the political office holders both elected and appointed have tried. At a point we met with the security chiefs within Badagry axis and agreed on the way to go but we are still witnessing the same thing.”