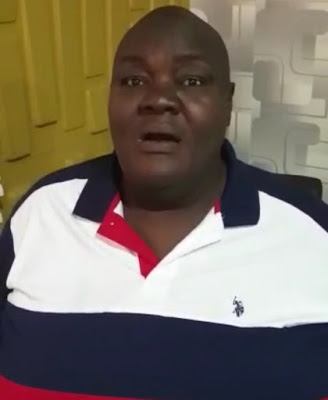 Following a report in some newspapers about the alleged forceful ejection of a sexagenarian couple Mr. and Mrs. Adeoye from their property at Oke Afa area of Lagos state by some alleged land grabbers led by operatives of the Special Anti Robbery Squad in Abuja, the first son of the Ashamu family, Omotunde Ashamu who was fingered as the mastermind of the crime has come out to state the circumstances surrounding the matter.

In an interview with our correspondent Mr. Tunde Ashamu, a lawyer, said Mr. and Mrs. Adeoye were never ejected from the property they were occupying at Egbe–Ejigbo Road in Oke Afa but simply asked to show proof of ownership of the land to enable them to continue to enjoy their occupancy.

Mr. Tunde Ashamu denied being a land grabber saying what he did a couple of months ago was an evaluation of his late father’s estate with a view to determining the genuineness or otherwise of the occupiers based on documents that conform to a Supreme Court judgment they got in 1986.

“I needed to know what is on ground as regards my late father’s property in view of the fact that I was not around for some time.  We discovered a rainbow of unscrupulous people who have been using all manner of dubious documents to sell off my father’s property. Some of them claimed to be Omo Onile (indigenes), some claimed to have the authority of Ikeja Real Estate (a concern that was operating on 25 years lease agreement with my father but which has since been struck out by the CAC) and others relied on contrived documents from pseudo land speculators masquerading as proxies and agents to my late father,” he said.

In view of this unwieldy title documents flying all over the place, Mr.Ashamu explained that he thought it wise to do a physical forensic evaluation of his family’s property and it was in this process that he ran into Mr. and Mrs. Adeoye who claimed to have bought the property from one Shekoni, a block maker in the area who from all records was a mere tenant on the plot.

Mr. Tunde Ashamu said they found out that these empty plots of land that Mr. and Mrs. Adeoye claimed to be theirs was occupied by hoodlums perpetrating all kinds of heinous activities.

Continuing the narration of how the couple claiming owner came into the picture, Mr. Ashamu said, “To stem the tide and make the couple prove genuine ownership, they reported the matter to the Lagos state Commissioner of Police through a petition dated March, 2019. The Commissioner of Police then  detailed the Lagos Anti Robbery squad SARS to take action on the matter and it was in the process of arresting the hoodlums on the plot that Mr. Adeoye suddenly appeared from across the street with a claim that the plot of land belongs to him.

“The police asked him to show proof of ownership and when he could not, they told him to follow them to the police station to make further clarification.”

Mr. Ashamu added that the Police never manhandled or ruffled Mr. Adeoye in all their interactions with him but rather ushered him into their vehicle with a decorum befitting of a senior citizen.

“As they were taking him to the station,” Mr. Ashamu continued, “the Oba of Ejigboland sent an emissary to the Police for mediation through one Tajudeen Murtala, (the acclaimed overlord of the Ashamu family) to let Mr. Adeoye go and report to the police at his own convenience.  The man was taken back to where he was picked from within one hour.”

Ever since this incident, Mr. Tunde Ashamu said in spite of his health condition he has had several intimidating  invitations from the Police ranging from the DPO in Ejigbo, to the Area commander of Area D in Mushin and AIG Zone 2, Onikan Lagos, respectively, all on the promptings of Mr. and Mrs. Adeoye who have been adamant on  obstructing him from taking possession of his father’s land despite a Supreme Court judgment with reference number SL/43/1986 dated 7th November, 1986 delivered and signed by A. G KARIBI WHYTE which the Adeoye’s family fall short of.

“Almost on a forth night basis, the police in Lagos are either inviting me or chasing and arresting my agents from the land,” Mr. Ashamu lamented.

Apparently heckled by the plethora of security threats unleashed on him by the Adeoye family, Tunde said he decided to take his matter before the Inspector General of Police who then ordered his monitoring team to take over the case.

“As an adjunct to their pressure on us,” says Mr. Ashamu who is almost bed-ridden, “the Adeoye family dragged us before the Lagos State Task Force on Land Grabbing in Alausa, Ikeja. We attended the summons where all parties to the matter were present and the only document the Adeoyes could tender as proof of ownership of the land was a job card given to them by one Al Maroof which is not a title document and another document from Ikeja Real Estate which everyone knows is not valid in view of the fact that Ikeja Real Estate has no power to sell land because it held the land on lease.

“Not impressed by the acclaimed documents the Adeoyes flaunted, the Secretary of the Task Force, Mr. Owolabi Arole advised us to settle the matter amicably among ourselves, which we all agreed to. However, all attempts to make the Adeoyes family to come to the table for settlement after the intervention of the Task force have proved abortive despite several calls on them.”

Mr. Tunde Ashamu said they were still contemplating what to do to make the Adeoyes come to terms with them, when they got an Ikeja High Court summons  Suit Number …ID2360M19……… courtesy of the Adeoyes on the same matter. He said they met them at the court and the matter has been adjourned to January 2020.

Mr. Omotunde Ashamu reiterated that his family is not threatening or harassing the Adeoye family or anybody but only standing on the Supreme Court judgment as a mantra over the Ashamu land.

COVID-19: People Are Hungry And No Palliatives For My Community – Baale of Baruwa, Eti-Osa LGA

NIGERIA AT 60: The logo was not plagiarized -TBWA Africa

Video: Buhari is an Autocrat and Ethnic bigot in a Democracy –Dr. Pearse